Connected by more than an acronym 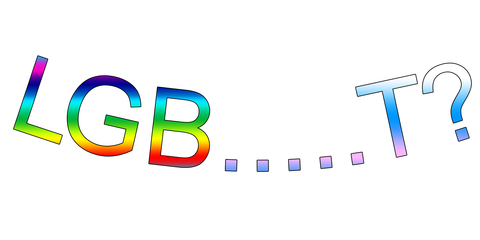 Every now and again we should take a step back and re-evaluate the things we think we know. In doing so, we must be comfortable admitting when we’re wrong and learning from the mistake(s) we’ve made.

But there’s more to it. Like a crash scene investigator, we need to break down the ideas which led us to the wrong conclusion in the first place. It’s not a simple matter of admitting fault and moving on, but a complex matter of understanding from the onset as to how and why we erred.

Earlier this year, I’d linked to a story out of Bourbon, Missouri about the public backlash when sixth-graders had been asked to fill out a mental health questionnaire by the state’s department of health. The questionnaire had questions asking about student’s sexual orientation, gender identity and if they’d considered changing genders. In my arrogance, I felt compelled to weigh in on this as authority. In doing so, I proved I am anything but an authority.

I became aware of my gender incongruity when I was around six years old. For that reason, I felt the questions relating to gender were valid for a sixth grader.

However, my infinite wisdom offered no concession to notions of sexual attractions. Instead, I’d indicated that 11-year-olds are probably a little too young to weigh in on their orientation. One of my followers wasn’t going to let that slide. I applaud this individual for challenging my position.

Without citing their whole response, this statement seemed as brash and honest as a gauntlet across my cheek. “…you want acceptance and understanding for the youngest of your tribe but deny the same comforts to the youngest of another's tribe?”

They were right to make this statement because I had no first-hand experience with matters of sexual orientation. Nowadays, as a transwoman married to a woman, I would be considered a lesbian.

And therein lies the problem.

As a child, I felt my issues relating to gender were problems within myself. My anatomy led me to believe I was a man. I had no “reason” to question attractions to women. With that impulse sitting on what society largely considered the “right” side of sexuality, I had no pause to question my sexual orientation.

And here is where I lost my perspective. I don’t know when I “learned” to love women because it was not marked by feelings of shame, but shame ingrained when I knew I shouldn’t have been a boy.

Since I never had an attraction to my opposite gender relative to my gender identity, I assumed no one else could experience a conflict of sexuality at such a young age. It is my selfishness and short-sightedness giving rise to a separation of “tribes.” A separation I didn’t want and was too naïve to realize I was promoting.

This issue isn’t simply a problem with me; it’s a community problem. While I’ve never witnessed it first hand, I have heard the stories of others who have seen the separation. It’s an undercurrent of “them vs. us,” or for lack of a better term “LGB vs. T.”

More than just an acronym connects our lives. I didn’t realize I’d created mental segregation within the community; I felt I viewed us all equally. The commenter showed me otherwise.

We need to look deeper into ourselves and realize even the acronym implies division. How we move beyond these bitter divisions isn’t straightforward. It’s like the story I’ve just told; we need to listen to the viewpoints that run counter to our own and acknowledge that we might actually be fallible.

No one loves a perfectionist. Be beautifully flawed with the rest of us, and we’ll move past these obvious and not-so-obvious demarcations.