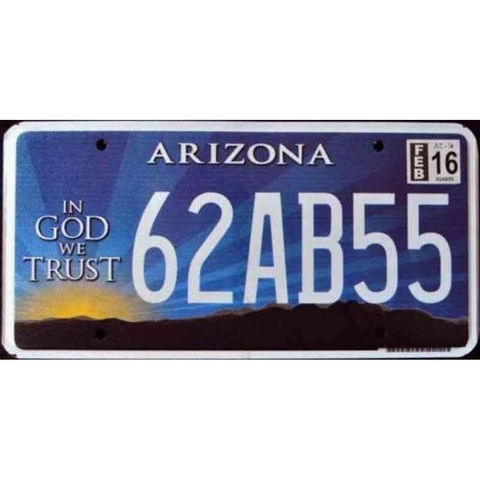 This Arizona specialty plate is sponsored by an anti-LGBTQ group. Arizona Department of Transportation.

The Alliance Defending Freedom (ADF) is a group identified by the Southern Poverty Law Center (SPLC) as an anti-LGBTQ hate group. ADF is raking in the dollars from an Arizona state specialty license plate with the motto “In God We Trust” on the tag.

The plate sells for $25, of which $17 goes to the sponsoring organization. The state says that the fee “goes to promote the national motto ‘In God We Trust’, 1st amendment rights and the heritage of this state and nation.”

The ADF website says it a little differently: “Alliance Defending Freedom advocates for your right to freely live out your faith.”

Although that may sound okay to many of us, ADF’s actual primary focus is to attack LGBTQ rights. They are the lawyers that worked to get the Masterpiece Cakeshop v. Colorado Civil Rights case to the United States Supreme Court, in a blatant attack on anti-discrimination laws.

The case involved the owner of the bakery, Jack Phillips, who refused to bake a wedding cake for a same-sex couple. The Supreme Court didn’t decide whether the Colorado anti-discrimination law was unconstitutional, but rejected how the state decided this specific case.

Colorado will have another shot at deciding this case, and it may again end up at the Supreme Court. ADF of course claims it as a victory.

The revelation that over one million dollars has gone to ADF since the beginning of their license plate sponsorship has gotten Arizona atheists and LGBTQ activists up in arms.

“State Sen. Juan Mendez, one of the few openly atheist state senators in the country, has now proposed a bill, SB 1462,” according to the website FriendlyAtheist.com.  The bill “would create a public list of groups that benefit from those specialty plates. He wants to make everything transparent.”

Under the new bill, the Department of Transportation would be required to maintain a database with the name and mission of each entity receiving funds from specialty plates, according to the Secular Coalition for Arizona. “Any driver selecting a specialty plate would also receive information on their registration receipt about the entity funded by their selected plate.

“’The legislation establishing this license plate passed as a floor amendment with no discussion — there was no public awareness of what was happening or where the money was going,’ says Tory Roberg, the director of government affairs for the Secular Coalition for Arizona….

“‘People who choose the ‘In God We Trust’ plate never know that they’re sending money to ADF. It’s not on the ServiceArizona website, it’s not in the statute establishing the plate, it’s nowhere.’”

Senator Mendez has also introduced another bill, SB 1463, that would repeal the “In God We Trust” plate.

“Hopefully in the future we can put in place some common sense guidelines that would bar hate groups from earning money through Arizona license plates,” says Mendez. “State dollars should not be funding an organization that works to strip residents of our state of their human rights and human dignity. It’s appalling that we’ve already sent over a million dollars to this extremist hate group.”