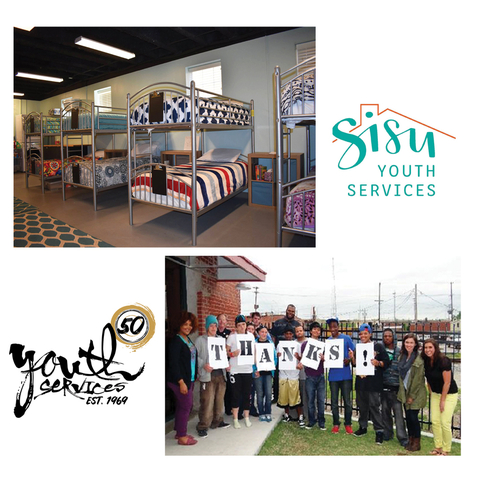 The dorm at Sisu and Youth Services of Tulsa, photos provided

Queer youth are being kicked out of unaccepting homes, but some youth shelters are helping them find permanent housing.

According to a study from the University of Chicago, queer youth are 120 percent more likely to experience homelessness than heterosexual youth. While only 7 percent of young people identify as LGBTQ+, 40 percent of homeless youth are LGBTQ+.

Sara Framel, director of outreach at Youth Services of Tulsa, said homelessness in the LGBTQ+ community is rising at an astronomical rate due to lack of support and lack of resources.

“Most commonly, we see youth that are kicked out of their homes by a family that doesn’t support them,” Framel said.

According to a report from the True Colors Fund, LGBTQ+ youth are more likely to be forced away from their homes because of their sexual orientation or gender identity.

55.3 percent of homeless LGBTQ+ youth and 67. 1 percent of transgender youth reported being forced out of their parents’ homes.

“We try to do our best to show respect to all human beings and are learning every day how to do that in the best way possible,” Framel said.

Framel said education is the most important thing that can make a difference for the future.

“I think the biggest difference people can make is to educate themselves on things that may seem different to them,” Framel said. “So much compassion and understanding come from education and opening up to ideas that are different than your own. I am hopeful for a community that not only seemingly feels safe for all people but truly is safe for all people.”

“All homeless youth are experiencing trauma,” Stanislava said. “They’re in crisis, and especially with LGBT youth, they often are coming from homes where they have been traumatized by their legal guardians for not accepting them as they are. We affirm them, and we support them.”

Many shelters also require background checks and trauma-informed care, and they don’t allow youth with violent charges or any use of discriminatory speech.

She said they also teach her hings, including dance moves, like “flossing.”

Last year, while Stanislava was working overnight, a young transwoman asked if she could look in the clothing closet. Normally, the closet is reserved for drop-in hours, but Stanislava could tell this was important.

“If I have someone who needs to talk in the middle of the night, I’m going to set aside data entry and make sure they are okay.”

After looking at the wardrobe, Stanislava noticed the girl had been eyeing the bras. She said she’d never worn a bra and didn’t know how to go about it. So Stanislava found the perfect fit, and the girl went to the bathroom to try it on.

“She came back crying, and she said, ‘I feel like I’m a woman for real now,’” Stanislava said.

Half of the LGBT youth at Sisu identify as trans, so it’s important that employees make sure they’re using preferred names and encourage conversation about gender identity.

“The trans youth are probably some of the most at-risk and some of the strongest people I know,” Stanislava said. “They are resilient.”

Both Sisu and the Youth Services of Tulsa provide counseling, which is especially important for homeless youth. According to a 2018 report from the Oklahoma Homeless Alliance, 31 percent of the homeless population in Oklahoma City suffers from mental illness, and homeless youth are more likely to experience severe anxiety and depression and less likely to seek treatment.

While the statistics are alarming, there are multiple organizations providing resources to LGBTQ+ youth, and, according to the True Color Fund report, 66 percent of national resources for homeless youth have LGBT-specific programs.

Stanislava said the youth inspire her just as much as she tries to inspire them.

“When they come to us in crucial need, and I see them a month or two later, happy and healthy and working towards goals instead of just struggling to survive every single day, to see that they can start having dreams instead of just wondering where their next meal is coming from is worth more than anything,” Stanislava said. “And I will work there until they pull me away.”