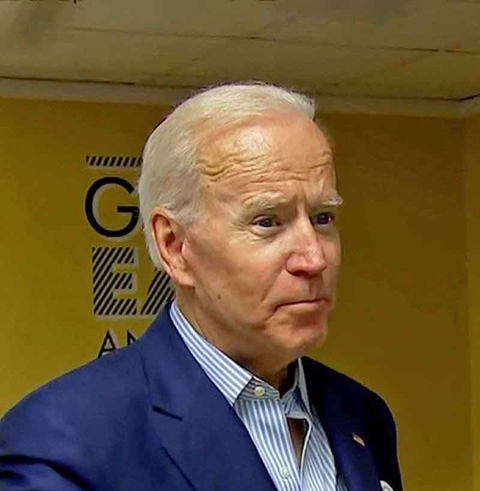 If you are Joe Biden, you wake up every single day rooting like hell for Donald Trump to talk or tweet -- ideally both! -- about you. And so far in Biden's 2020 candidacy, that's exactly what the President is doing.

On Tuesday in Louisiana at an official -- ahem -- White House event, Trump said this of the former vice president: "What happened to him? I'm looking, I said, 'That doesn't look like the guy I knew, what happened to him?'" (Trump also ran down several other 2020 Democrats in that "official" speech.)

Three days earlier, Trump tweeted this about Biden: "China is DREAMING that Sleepy Joe Biden, or any of the others, gets elected in 2020. They LOVE ripping off America."

And, two days before that, he tweeted this bit of political handicapping: "Looks to me like it's going to be SleepyCreepy Joe over Crazy Bernie. Everyone else is fading fast!"

All told, Trump has tweeted about Biden more than 30 times since the former vice president officially entered the 2020 race late last month. During that same time period, Trump has mentioned Bernie Sanders in four tweets and Elizabeth Warren in one.

Trump's obsession with Biden worries the President and GOP allies looking toward his 2020 reelection prospects, report Jonathan Martin and Maggie Haberman in The New York Times. Here's the key bit from their story:

"For Mr. Trump's advisers, it was one more example of the President's inability to resist offering what amounts to an in-kind contribution to a Democrat who, according to their own polling, is positioned to soundly defeat them next year...

"...In the three weeks since Mr. Biden announced his candidacy, Mr. Trump has tried out two nicknames on him, accused his opponent and family members of corrupt dealings with Ukraine (prompting a coordinated Democratic response) and argued that he's naïve about the threats America faces."

Consider all of this from Biden's perspective. His strongest argument in a primary in which he is neither a fresh face nor the leading liberal is that he is the person best positioned among the 22 Democrats to do the one thing everyone in the party agrees has to be done: Beat Trump next November.

And Biden isn't shy about making that argument in the direst possible terms. This, from his campaign announcement video, makes that point:

"We are in the battle for the soul of this nation. I believe history will look back on four years of this President and all he embraces as an aberrant moment in time. But if we give Donald Trump eight years in the White House, he will forever and fundamentally alter the character of this nation -- who we are -- and I cannot stand by and watch that happen."

With every tweet and every public utterance about Biden, Trump is making that case better than the former vice president ever could. Every time Trump mentions him, Biden gets to do two things:

1) Respond -- which drives home the idea that the general election race between the two has already begun.

2) Talk to every activist, staffer and donor he meets about how worried Trump is about him -- and how that proves beyond a shadow of a doubt why he is the person best positioned to beat the incumbent.

Again, it's a dream scenario for Biden. He is simultaneously elevated above the other 21 Democrats in the race and affirmed in his argument that he is the one Trump fears the most.

There will be some in Trumpworld who will try to argue that Trump knows all of this and his attacks on Biden are effectively the President picking an opponent he can beat.

I'd be skeptical of that theory for two reasons. First, because we have ample evidence -- aka every day of Trump's presidency -- that proves that there is no grand plan from which he is working. He is just doing and saying things -- and then reacting to the reaction those things create.

Second, there's zero polling data that suggests Biden is the weakest -- or even among the weakest -- Democratic opponents for Trump. In fact, a CNN poll released last month showed Biden leading Trump by 6 points (and over 50%) in a hypothetical 2020 general election match-up.

Trump attacks Biden because he can't help himself. But far from damaging Biden's chances of winning the Democratic nomination, Trump is boosting them immeasurably.