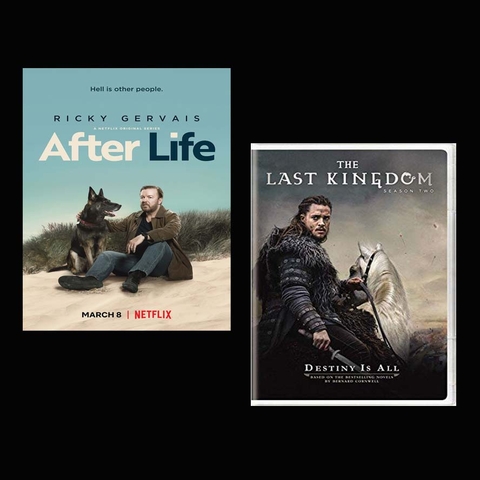 It is no secret that Netflix continues to crank out varied productions in huge numbers so picking and choosing can become tricky when you feel like a binge. Here is a worthy couple that snared me recently.

After Life: Ricky Gervais, my favorite misanthrope, never ceases to amaze with what he will come up with to explore. This series demonstrates the emotional dead-ends and new paths where self-pity and suicidal depression can lead.

Perhaps you have experienced the odd and bitter wilderness of loss when somebody extremely close to you dies, and you are left to make your way through a world forever changed by that loss. When others say they know how you feel it can only make things worse because you know they don't.

Gervais embraces this and more as a widower who turns his acerbic wit and biting sarcasm outwards which results in some very funny while very dark stuff.

We get to see Gervais in the depths of his range carrying on in his small English village life working at a local newspaper. The absurdity of the eccentricities of the locals leads him down all sorts of weird rabbit holes and even into a stint with heroin since he thinks he has nothing left to lose.

Even as he denies the veracity and worth of daily life, his search for any meaning brings us along for the ride. His dog (Brandy) certainly calms down some of the existential distress. I badly want another season.

The Last Kingdom: While waiting for the final season of Game Of Thrones to fire up, I scanned around for a decent series like it that would give me some sort of similar fix.

At first, I was highly suspicious of this historical drama. It is based on the ascension of the Anglo-Saxon King Alfred the Great (David Dawson is great in this role), and his vision of a United Kingdom of England in the late 800s.

Right away you notice a blend of GOT and The Vikings. The main protagonist, Uhtred played by Alexander Dreymon, has an extremely complex quest of discovering his place in the world. He has one foot in the Saxon blood of his birth and his other foot in the cultural camp of the invading Danes who raised him.

But to pay undue attention to this and other familiar plot points would be a disservice to the incredible cinematography scenes and wonderful choreography of action. The production values are simply top-notch with the BBC showing their storytelling savvy on the evolution of relationships between strong characters with multiple dimensions.

There are some telegraphed sallies into soap since it swirls around monarchical family intrigues and loyalties, but that serves to sink you in even further. By the third season, you know you are binging on a spectacular bloody epic that stands tall within its own identity.