Democrats, America is ready for a gay president 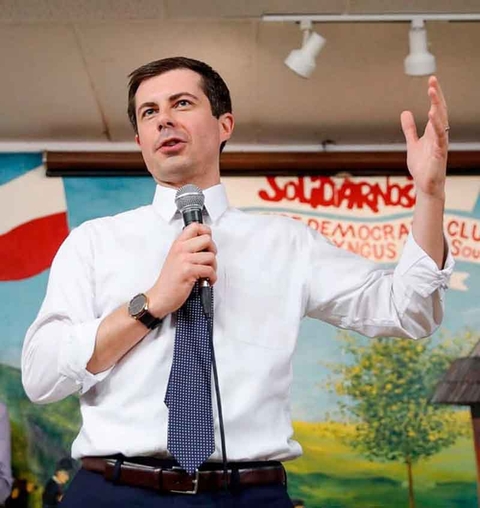 I was at a political fundraiser in 2007, in the company of several deep-pocketed longtime donors. President George W. Bush was near the end of his second term and much of the conversation wasn't about the anemic economy, the wars we were engaged in or the policies of the people vying to take his place.

Instead, it was about electability and whether the country was ready to vote for a black or female president.

Needless to say, we got our answer.

I was at a political fundraiser earlier this year, again nestled in among several longtime donors with deep pockets. President Trump was not viewed favorably by this crowd and much of the conversation wasn't about the Mueller report, the trade war we are engaged in or policies touted by the people vying to take Trump's place.

Instead, it was about electability and whether the country was ready for an openly gay president.

It makes sense that the millionaires in these spaces would hedge their bets based on the most pragmatic of questions: Can this person win? After all, a person doesn't get to be a one percenter by making a habit of investing in companies they don't believe will turn a profit.

But I couldn't ignore the irony of hearing so many blue-state-living/rainbow-flag-adjacent /"love-is-love" liberals in one room dismiss Pete Buttigieg's bid for the White House largely because he's gay, even from those within the LGBTQ community.

They like him. Hell, many even love him. But they don't believe the country's ready. Two of three Americans support same-sex marriage, including more than 80% of Democrats, and yet ...

In a Quinnipiac poll early this month, only 40% of Democrats and independents who lean Democratic thought the United States was ready to elect a gay president (though 86% of that same group said they were open to electing a gay president).

"We need to win," is what I've heard repeatedly over the past couple of weeks, even as Buttigieg has ascended from "Mayor Who?" to a candidate who has gained the collective recognition that he is one of the most impressive in the field. More than 1 million viewers tuned in his Fox News town hall on Sunday, and even hard-to-impress Chris Wallace found him compelling -- much to the consternation of the President.

Would this war vet who offered condolences to the people of France in French after the devastating Notre Dame fire be the front-runner if he weren't married to a man? Given his relative youth and position as the mayor of a small city, would he have graced the cover of Time magazine if he were not?

For all of the chatter about downplaying identity politics in the hope of rebuilding the blue wall in the Midwest, it has been my experience that despite the fact Buttigieg is a fairly successful elected official from the Midwest, it is precisely his identity as a gay man that gives many Democrats the greatest pause.

As someone who has worked in South Bend and written for the South Bend Tribune, I have a sense of the financial devastation that swept the area, especially for minorities. Buttigieg's policies may have helped revitalize the downtown area, improved infrastructure and brought tech jobs to an area that was heavily reliant on the auto industry, but it would not be unfair to characterize his time as mayor as not being overly beneficial to minorities.

But then again, front-runner Joe Biden helped write the 1994 crime bill that helped to lead to mass incarceration of minorities -- and co-front runner Bernie Sanders voted for it, so there's that. In fact, if an audit of policies and comments were performed on all the men and women running for president, you would be hard pressed to find one without a significant blemish.

The Democrats can call it pragmatism, they can call it being politically savvy, they can call it playing the odds... just as long as they are also being honest about the nature of the friendly fire directed at Buttigieg's candidacy. Again, if his executive inexperience or lack of substantive policy talking points were the main question marks, I would not have felt compelled to write this. But that's not what I'm hearing.

Editor's note: LZ Granderson is a journalist and political analyst.