How we got here: OKC Pride features “Legends & Rebels” in 2019 theme 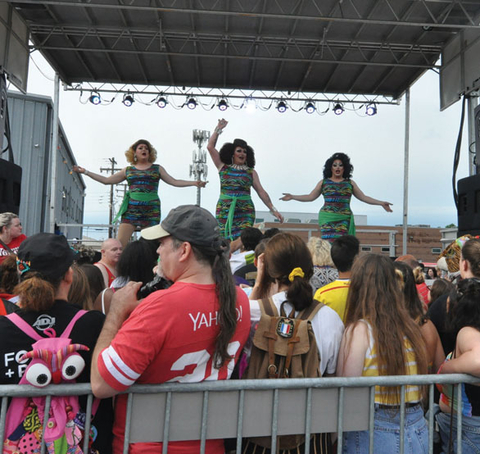 The Oklahoma City Pride Alliance is hosting several events in hopes of united LGBTQ+ people in Oklahoma City with this year’s theme of “Legends & Rebels.”

Event Director and President of Pride Alliance of OKC, Lauren Zuniga, said the theme brings back the motivation of the first Pride at Stonewall.

2019 is the 50th Anniversary of the Stonewall Riots, which began with a police raid of the Stonewall Inn in New York City in 1969. The event was prompted by two trans women of color, Marsha P. Johnson, who threw the first shoe, and Sylvia Rivera. Stonewall led to widespread national mobilization of efforts to advance equality for the LGBTQ+ community.

Zuniga said it’s important to tell the story of Stonewall, especially for the younger generations.

“Those first initial uprisings and activism are what led to the modern LGBTQ+ liberation movement,” she said. “It led to the first Pride Parade and Harvey Milk being elected as the first openly gay elected official.”

She said she also wants people to know more about the history of Oklahoma City, which she said is similar to the story of Stonewall.

In 1983, OKC police raided Angles Bar, and the community fought back. That year was the first Pride celebration.

Although strides have been made in LGBTQ+ equality, a person can still be fired for being gay or trans in 28 states. In 70 countries, it is illegal to be gay and is punishable by death in 10 countries.

To Zuniga, Pride is not just about celebrating the successes, but also acknowledging the progress still to be made.

She said Oklahoma City has a lot of progress to be proud of, like electing its first openly gay city councilman, James Cooper, but it’s taken 50 years to get to that point.

“We have come so far, yet we aren't there yet,” Zuniga said.

She also said she is passionate about Pride because she grew up queer in Oklahoma City in the ‘90s and has seen the progress and the hardships of the LGBTQ+ community.

Pride Alliance of OKC is working on creating better accessibility and diversity in Pride and is partnering with districts and venues to make Pride more city-wide that ever.

They’ve partnered with Nominee studio on a project called “Faces of Pride,” which features photos and bios of LGBTQ+ people in Oklahoma City.

They will be using the Wreck Room, an historic all-ages LGBTQ+ club, to feature “Faces of Pride,” of which Zuniga said she’s especially excited for this year. The venue will also serve as the Pride headquarters during the parade and festival.

Zuniga said several businesses across Oklahoma City are helping out with Pride Alliance of OKC.

“Over and over, I am blown away by the generosity of this community,” she said.

Below is a list of the events happening this year at Pride in OKC.