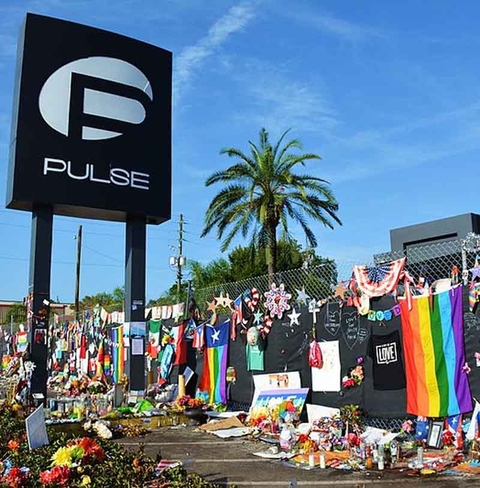 Memorials left outside the shuttered Pulse nightclub in 2016. Flickr photo.

Three years ago today, on June 12, 2016, we awoke to the news that 49 people had died in a terror attack at the Pulse Nightclub, and LGBTQ club in Orlando, Florida. It was the deadliest mass shooting ever in the United States, at that time.

Floridians and LGBTQ people everywhere in the world are holding somber memorial gatherings, according to the Associated Press.

A spokesperson for the Victory Fund said, “Today marks the third anniversary of the Pulse Nightclub shooting, the horrific terrorist attack against the LGBTQ community.

“People started their evening celebrating. By the end of the night, 49 lives had been lost. The terror of that night, the senseless violence that directly targeted our community, is almost beyond comprhension. Survivors still battle violent memories and trauma.

“But in the aftermath of Pulse – if something this tragic can ever truly end – a new movement was born. A new generation of LGBTQ leadership in Florida is rising up, led by a stand fast determination to ensure that there are no more victims, no more tragedies. Survivors of the Pulse shooting continue fighting, despite great obstacle and opposition, carried by one bold mantra: never again.”

Human Rights Campaign (HRC) President Chad Griffin said, “In our work to achieve a future free from hate and fear, we carry with us the memories of the 49 LGBTQ people and allies -- nearly all of them Latinx -- whose lives were cruelly and senselessly taken at Pulse.”

Griffin also noted that the Pulse terror attack drove renewed efforts to pass gun control legislation and that HRC would continue to work in those efforts.

One effort, by Florida Gov. Ron DeSantis, stumbled in its recognition attempt. In a proclamation, DeSantis ordered flags in the state to be lowered to half-staff and asked Floridians to pause to remember the victims of the 2016 shooting at the Pulse nightclub in Orlando,” the AP reported.

However, the text of the proclamation omitted any reference to the LGBTQ community or the Latinx community. DeSantis denied that he had had anything to do with writing the proclamation, blamed his staff and issued a corrected version, which said Florida wouldn’t tolerate hate toward the LGBTQ and Hispanic communities.

The governor is expected to visit the Pulse Memorial this afternoon.

Orlando TV station WFTV reported, “Bells were tolled 49 times, beginning at noon, to commemorate the life of each person who died in the shootings at the gay nightclub.”

A third annual remembrance ceremony will be held from 7 p.m. to 8 p.m. EST at the shuttered club, according to the station.

“In the U.S. Senate, Florida’s two Republican U.S. senators introduced a resolution honoring the 49 people killed on Latin night. The resolution, which passed with unanimous consent, noted that the massacre was “an attack on LGBTQ community, the Hispanic community, the city of Orlando, the state of Florida and the United States,” reported the AP.

The gunman, who had pledged allegiance to the Islamic State, was killed after a three-hour standoff by Orlando SWAT team members.

Nearly $14 million has been raised for a memorial and museum at the site of the club. The project is expected to cost $50 million and is expected to open in 2022.