Indict the President? Why not? 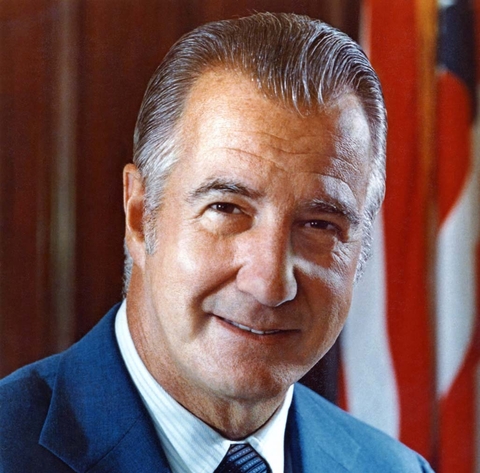 Vice President Spiro Agnew can be thanked for the rule that the president cannot be indicted. Official photo.

The Mueller report tells us three things: The Russians did interfere in the election; neither the president nor his campaign colluded in that effort; that there have been at least ten occasions when President Trump either obstructed justice or tried to.

We are still left with the question: Why can’t a sitting president be indicted for criminal behavior?

Special Counsel Robert Mueller told us, “If we had had confidence that the president clearly did not commit a crime, we would have said so.”

In other words, in the case of the incidents of obstruction of justice, it appears that Mueller thought the president should be indicted. But they didn’t say that, because charging the president with a criminal act is not allowed by the Department of Justice (DOJ) rules.

What are these federal rules? They are not in the Constitution, nor are they included in any law. They are not contained in court decisions considering the issue. In fact, they are simply the legal opinion of the DOJ’s Office of Legal Counsel (OLC).

The rule was issued in 1973 to determine whether or not Vice President Spiro Agnew could be indicted while he was in office.

Agnew had been found taking cash bribes at his office in the White House. The DOJ wanted to determine if it could indict him. In their opinion, they concluded that a Vice President could be indicted, but the President cannot. The OLC reviewed the issue in 2000 and determined that opinion “still represents the best interpretation of the Constitution.”

In my opinion, interpreting the Constitution is the job of federal courts, issued in a ruling. In a question as important as “Can a sitting president be indicted,” I would expect that it would require a ruling by the United States Supreme Court.

That’s why the opinion remains just that – an opinion by an unelected lawyer or group of lawyers working in the DOJ.

I think following that ruling on so important an issue is unconstitutional.

The 1973 memorandum makes for interesting reading. Much of it argues that a president can be indicted or at least that the Constitution is unclear on it.

After several discussions of the Constitution and documents that were written by people who wrote and signed it, the DOJ made a decision and released it. The conclusion was, “Thus it appears that under our constitutional plan it cannot be said either the courts have the same jurisdiction over the President as if he were an ordinary citizen or that the President is absolutely immune from the jurisdiction of the courts regarding any kind of claim.”

Then it gets to its main claim: “During the past century the duties of the Presidency … have become so onerous that a President may not be able fully to discharge the powers and duties of his office if he had to defend a criminal prosecution.”

And then it states the obvious - a constitutional remedy to that issue -  saying, “This might constitute an incapacitation so that under the provisions of the Twenty-fifth Amendment, Sections 3 or 4, the Vice President becomes acting President.”

And there it is. Vice President Pence and the Cabinet could invoke the terms of the 25th Amendment, and Pence would become Acting President. President Trump could focus on defending himself in court.

That’s how it should be. Of course, don’t hold your breath!

The opinions expressed in this column do not necessarily reflect the opinions of the editors and staff of The Gayly.