Megan Rapinoe seals her World Cup win with a kiss 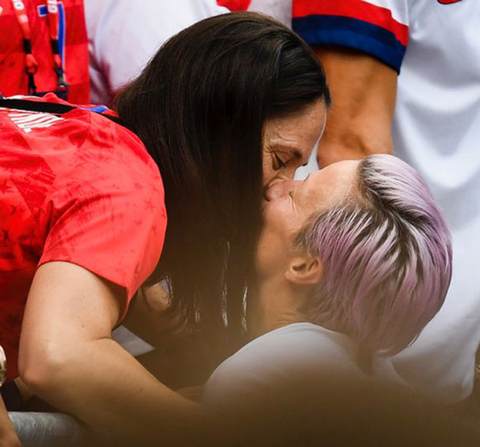 After helping lead her team to the Women's World Cup title Sunday, Megan Rapinoe needed one more thing: A kiss from her significant other.

And she got that after she tracked down her girlfriend, WNBA star Sue Bird, in the stands of Parc Olympique Lyonnais stadium in Lyon, France.

They fought with the President

The couple's relationship was put under the spotlight after Rapinoe blasted President Trump and said she would not visit the White House if the US Women's National Team won the World Cup.

Trump responded by ranting about Rapinoe on Twitter, telling her to "win first before she talks" and "finish the job."

RELATED: US World Cup win proves women should be paid the same as men, team says

The President then extended a White House invitation "win or lose" to the US national team.

Trump was also upset with Rapinoe because she knelt during the US national anthem in support of Colin Kaepernick's silent protest against police brutality.

All this presidential drama was just too much for Bird, who penned a 2,900-word article for the Players' Tribune titled "So the President F*cking Hates My Girlfriend."

"I mean, some of it is kind of funny..... but like in a REALLY? REALLY? THIS GUY??? kind of way," Bird, a star on the Seattle Storm, wrote. "It would be ridiculous to the point of laughter, if it wasn't so gross."

They've been in the spotlight before

Bird said that, while she was inclined to laugh at the ridiculousness of it all, the online hate she and Rapinoe have gotten from strangers has been unsettling.

Bird, who won three WNBA titles and four Olympic gold medals, said Trump's criticism would not get to Rapinoe.

This isn't the first time that this sports power couple has made headlines. Last year they were the first gay couple to appear on the cover of ESPN the Magazine's Body Issue.