Trump claims he went to bunker for "inspection" amid violent protests 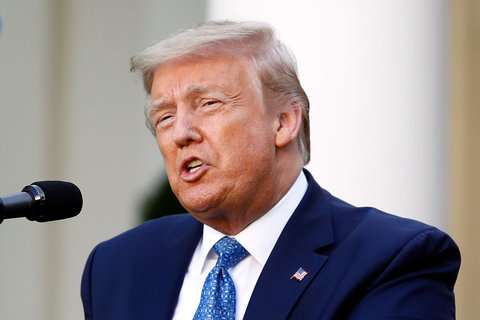 Trump claimed Wednesday he went to bunker for "inspection" amid violent protests. Photo by Patrick Semansky/AP via CNN.

President Donald Trump sought to explain his presence in an underground White House bunker during clashes outside the residence on Friday as an "inspection," rather than a retreat for his own safety, telling a radio interviewer Wednesday he was only in the safe room for a "tiny" amount of time.

"They said it would be a good time to go down and take a look because maybe sometime you're going to need it," Trump said, casting the episode as an appraisal of his security logistics rather than an emergency.

The second source told CNN that "if the condition at the White House is elevated to RED and the President is moved" to the Emergency Operations Center "Melania Trump, Barron Trump and any other first family members would be moved as well."

Trump, who was enraged when reports emerged he was rushed to the secure location, told Brian Kilmeade on Fox News Radio that in fact he went during the day and not when protests were raging outside his front door.

"I was there for a tiny, short little period of time," he said, adding it was "more for an inspection."

After the initial reports emerged, Trump fumed that he looked weak and insisted he be photographed outside the White House gates, a demand that ultimately led to his visit Monday to St. John's Church across Lafayette Square.

In his interview, Trump said he'd visited the bunker previously. He said he'd been there "two and a half times."

And he added those, too, were more to get a sense of the space rather than to protect himself from harm.

Trump was speaking as he continues to come under criticism for his walk to the church, which was preceded by police and other law enforcement officials clearing the square of peaceful protesters using chemical sprays and flash grenades.

Some of the most intense critics have been clergy at the church itself, one of whom described the visit as a "charade" because he did not stop to pray or even go inside the building.

Other religious leaders echoed those sentiments, suggesting Trump had used a Bible -- which he held up awkwardly outside the church -- as a prop.

Trump, however, insisted his visit had been widely praised.

"The church leaders loved that I went there with the Bible," he said.

Trump also claimed he was unaware of the tactics used to clear the park ahead of his visit -- even though the explosions from flash grenades could be heard from his address in the Rose Garden and the smell of pepper spray was in the air as he walked over.