Alexa, Siri and Google Voice have new answers when you ask about Black Lives Matter 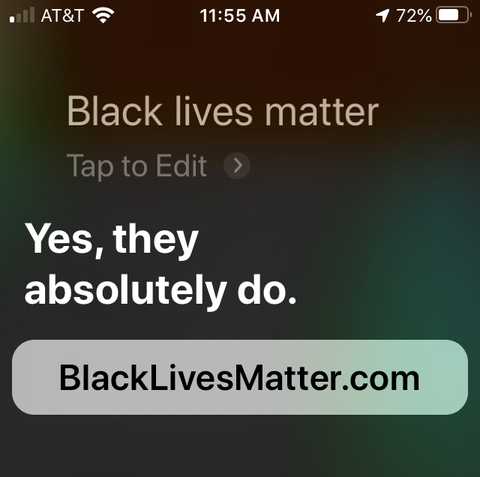 That is the question that Apple's Siri, Amazon's Alexa and the Google voice assistant are poised to answer about the Black Lives Matter movement after a range of updates in the past several days.

While the various voice assistants already had responses to the question, "Do black lives matter?", Amazon and Google told CNN that they were recently updated with new responses in the wake of George Floyd's death and the mass protests that followed.

Alexa previously responded to the question by saying, "Black lives matter. I think people deserve to be treated with fairness, dignity, and respect."

Now, Alexa says, "Black lives matter. I believe in racial equality. I stand in solidarity with the Black community in the fight against systemic racism and injustice. To learn how you can take action, I recommend visiting blacklivesmatter.com and NAACP.org."

"Amazon's stance on this is very clear and this response reflects that," an Amazon spokeswoman told CNN.

Siri keeps it short and simple by simply responding with, "Yes, Black Lives matter." That response is followed by a link to blacklivesmatter.com.

Google's voice assistant says, "Black lives matter. Black people deserve the same freedoms afforded to everyone in this country, and recognizing the injustice they face is the first step towards fixing it."

The updates come shortly after nationwide protests have erupted, sparked by the killing of 46-year-old Floyd by Minneapolis police. Thousands of people have marched in cities across the nation since Floyd's death calling for an end to systemic racism and police brutality.