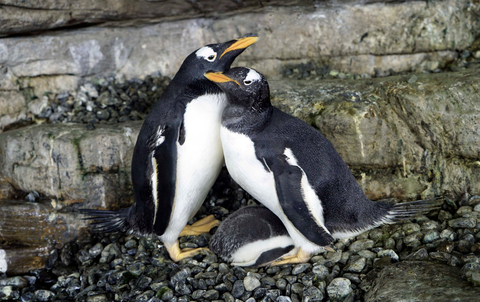 Two female gentoo penguins are new moms at an aquarium in Spain and are raising the baby chick they adopted as an egg.

Officials at Oceanogràfic València say that Electra and Violet built a nest together out of stones and "began to have the usual attitude and actions prior to reproduction," according to a news release that was translated from Spanish.

Their caregivers decided to let them adopt and incubate another penguin couple's egg, which hatched this month. Electra and Violet are now raising the baby, which will become independent after about 75 days, the aquarium said.

It's one of three chicks born so far this breeding season in the aquarium's colony of 25 gentoo penguins.

The same-sex penguin adoption is a first for Oceanogràfic València, but the aquarium says it's fairly common.

The formation of same-sex pairs is common in more than 450 species of animals and occurs both in zoos and in nature, the release said.

Other zoos in London, Berlin, and Sydney have also had same-sex penguin families.

Gentoo penguins are the third-largest species of penguin and have a bright red-orange bill and distinctive white eye patches.

They breed on many sub-Antarctic islands and their largest populations are found in the Falkland Islands and South Georgia in the southern Atlantic and the Antarctic Peninsula.