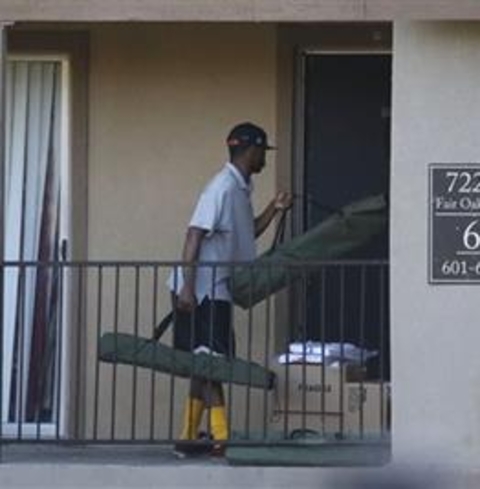 A young man retrieves supplies left on the front stoop of an apartment where an Ebola infected man had stayed at The Ivy Apartments complex in Dallas, Friday, Oct. 3, 2014. Dallas city officials ordered the family who resides at the apartment to remain in their home. (AP Photo/LM Otero)

Dallas (AP) — A hazardous-materials crew arrived Friday at a Texas apartment where the U.S. Ebola patient stayed to collect bed sheets and towels used by the infected man before he was hospitalized.

The family living in the apartment has been confined to their home under armed guard while public-health officials monitor them — part of an intense effort to contain the deadly disease before it can get a foothold in the United States.

Louise Troh, who shares the apartment with her 13-year-old son and two nephews, said she is tired of being quarantined and wants authorities to decontaminate her home.

"Who wants to be locked up?" she said Thursday. Private security guards and sheriff's deputies blocked the entrance to the 300-unit apartment complex.

Elsewhere, NBC News reported that an American freelance cameraman working for the network in Liberia has tested positive for the virus and will be flown back to the United States, along with the rest of the news crew.

A cleanup crew hired by the county and state paid an initial visit to the apartment Thursday evening to assess the job. They returned around midday Friday to complete the work, which was expected to take about three hours.

The family living there will be allowed to remain in the apartment during the cleaning. Earlier, officials had said they would have to be moved.

Items from both the apartment and from the hospital where Thomas Duncan is being treated, will be placed in secure containers and removed for disposal.

The first Ebola diagnosis in the nation has raised concerns about whether the disease that has killed 3,400 people in West Africa could spread in the U.S. Federal health officials say they are confident they can keep it in check.

The confinement order, which also bans visitors, was imposed after the family failed to comply with a request to stay home.

Judge Clay Jenkins, Dallas County's top administrative official, said he went to the apartment with two epidemiologists to apologize for the delay in removing soiled items. He said officials are working to make sure the family is comfortable and to improve their accommodations.

Also Friday, Texas health officials said they had narrowed the group of people they were monitoring from as many as 100 to about 50 people who had some type of exposure to the Ebola patient in Dallas.

Texas Health Commissioner David Lakey said all 50 are meeting with health workers and having their temperatures taken daily. So far, none show symptoms of the virus. Ten are considered to be at higher risk and are being monitored more closely.

The virus that causes Ebola is not airborne and can only be spread through direct contact with the bodily fluids — blood, sweat, vomit, feces, urine, saliva or semen — of an infected person who is showing symptoms. Those fluids must also have an entry point.

For example, people might get infected by handling soiled clothing or bed sheets and then touching their mouth, or if they are not wearing gloves while doing those tasks and have a cut on their hand.

Duncan's neighbors in the Liberian capital believe he become infected when he helped a sick pregnant neighbor a few weeks ago. It was not clear if he had learned of the woman's diagnosis before traveling.

Nonetheless, Liberian authorities announced plans to prosecute Duncan when he returns, accusing him of lying on an airport questionnaire about not having any contact with an infected person.

CDC Director Tom Frieden dismissed suggestions that people traveling from West Africa should not be allowed into the U.S.

"The fact is that if we tried to seal the border, it would not work because people are allowed to travel," he said Friday on ABC's "Good Morning America." Blocking travel, he said, "would backfire because it would make it harder to stop the outbreak."

Duncan arrived in Dallas on Sept. 20 and fell ill a few days later. An emergency room sent Duncan home last week, even though he told a nurse he had been in West Africa.

In a statement issued late Thursday, Texas Health Presbyterian Hospital said it followed communicable disease protocols by asking Duncan if he had come into contact with anyone who was ill. He replied that he had not.

A flaw in the electronic health records systems led to separate physician and nursing workflows, meaning the travel history documented by nurses was not passed onto physicians, hospital spokesman Wendell Watson said. He said the system has been corrected.

Duncan's symptoms included a 100.1 F temperature, abdominal pain, a headache and decreased urination, the hospital said. He said he had no nausea, vomiting or diarrhea. Based on that, the hospital decided to release him.

He returned two days later and has been kept in isolation since Sunday. Duncan was listed Thursday in serious but stable condition.