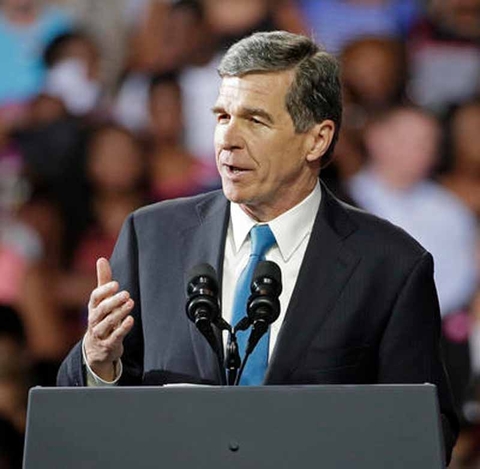 The Democratic governor signed the bill Thursday despite criticisms from the transgender rights community. The groups say the new measure still denies them protection from discrimination. They demanded nothing less than full repeal.

Cooper acknowledges that it's not a perfect deal and stops short of many things the state needs to do.

The North Carolina Senate and House have approved a compromise bill repealing the anti-LGBTQ law known as HB2 and sent the measure to Governor Roy Cooper. The new bill is labeled HB 142. The measure, which has been condemned by conservatives, liberals and human rights advocates, has three provisions:

• The preemption by the General Assembly of all regulation of access to multiple occupancy restrooms, showers or changing facilities. No “State agencies, boards, offices, departments, institutions, branches of government, including The University of North Carolina and the North Carolina Community College System, and political subdivisions of the State, including local boards of education” can make any regulation of bathroom access.

Effectively, the legislature could at any time pass another restriction on the use of bathrooms and locker rooms by transgender persons. The new law rolls back the regulatory rules requiring transgender people to use restrooms according to the gender on their birth certificate, rather than in conformance with their gender identity.

Human Rights Campaign (HRC) President Chad Griffin, in a statement issued before the Senate and House actions, said, “The rumored HB2 'deal' does nothing more than double-down on discrimination and would ensure North Carolina remains the worst state in the nation for LGBTQ people.

"The consequences of this hateful law will only continue without full repeal of HB2. Sellouts cave under pressure. Leaders fight for what's right."

HRC added, in its daily email update, “This means that North Carolina would continue to be the only state in the nation to have shamefully funneled anti-transgender animus into a law regulating restroom access. The proposal would also prevent cities in North Carolina from establishing non-discrimination protections for LGBTQ people for at least three years, undermining efforts by cities like Charlotte to attract top talent, major businesses, and other economic opportunities.”

The AP report said, “Sgro says the proposed legislation doesn't change the fact that the law excludes LGBT people from state anti-discrimination protections. He says if the General Assembly's Republican majority and the Democratic governor enact their negotiated deal, it will postpone LGBT protections for four years until local governments could be allowed to tackle changes.

“North Carolina NAACP President the Rev. William Barber says the new bill is convoluted and is a furtherance of discrimination.”

The provisions of HB2 resulted in a decision by the NCAA, NBA and other sports leagues to pull many major sporting events out of North Carolina. Entertainers, such as Bruce Springsteen, cancelled performances in the state.

Earlier this week, the AP published a report that the cost of HB2 to North Carolina over the next ten years would be $3.76 billion.

Legislators and the governor are hoping that the repeal of HB2 will saves NCAA events over the next four years. The league is deciding this week where events will be held from 2018 through the spring of 2022.

The HRC raised the question this morning about whether the new law is unconstitutional. In 1996, the United State Supreme Court, in Romer v.Evans, barred states from forbidding nondiscrimination protections for LGBTQ people under the Constitution’s Equal Protection clause. The Romer decision was an important, and early, LGBTQ rights victory at the high court.