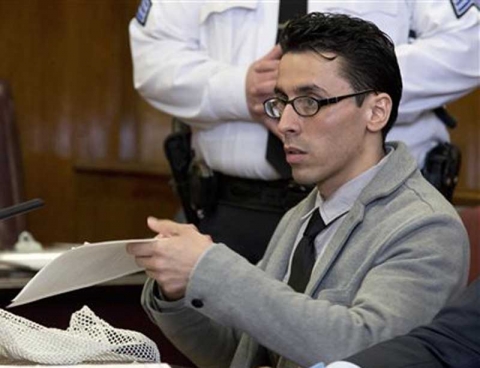 Morales admits pulling the trigger but says he can't be guilty of a hate crime because he is bisexual. Photo by Mary Altaffer, AP.

NEW YORK (AP) — When Elliot Morales was arrested for shooting a gay man in the head after taunting him on a street in Manhattan's Greenwich Village, he seemed like the archetype of an unrepentant bigot. Police recorded him laughing wildly as he described the killing.

A more complicated portrait has emerged in a bizarre trial that concluded Thursday. Morales, who represented himself, admits pulling the trigger but says he acted in self-defense and can't be guilty of a hate crime because he is bisexual. His star witness was a transgender woman who said she was his ex-lover.

Jurors will begin deliberations Tuesday in the case against Morales, 36, who is charged with murder as a hate crime and weapons possession in the shooting death of Mark Carson on May 18, 2013.

The shooting happened a few blocks from the Stonewall Inn, the site of 1969 riots that helped give rise to the gay rights movement.

Carson, 32, and his roommate, Danny Robinson, were passing in front of a pizza parlor shortly after midnight when Morales, witnesses said, called out to the two men, uttering a slur and saying they looked like "gay wrestlers."

The two men confronted Morales, and he walked around a corner as they followed, witnesses testified. Morales pulled a revolver, shot Carson in the face at close range and then ran. He was arrested moments later.

The killing made headlines and spurred a rally, partly because it came amid a spate of anti-gay hate crimes during spring 2013.

Morales, who spent 11 years in prison for armed robbery, rejected four court-appointed attorneys before deciding to represent himself at his trial.

That gave rise to the spectacle of Morales, the killer, cross-examining Robinson — the grieving survivor.

During the courtroom confrontation, Morales blamed the two gay men for the conflict that led to the shooting. He suggested they should have ignored the taunts and walked away. Instead, the two men followed him around a corner.

"You could've avoided all of this from escalating to the level it did, had you and Mr. Carson just went along with your own business," Morales said to Robinson in court.

Robinson bowed his head and replied: "That is so offensive."

Later in the trial, Morales called to the stand a transgender woman given the pseudonym "Jane Smith," who was shielded from the jury. Smith testified that she had a sexual relationship with Morales for years and that he never displayed ill will toward gays.

"Absolutely not," she said. "Not that I recall."

Taking the stand in his own defense, Morales said he had been drinking heavily before the shooting. He acknowledged arguing with Carson and Robinson but denied using gay slurs. He said he pulled his gun because he was afraid.

"I thought he was going to take something out and shoot me with it," Morales testified. "I thought one or maybe both of them had a firearm. So I kind of raised the firearm and turned away and shot it at the same time."

Delivering his final statement to the jury Thursday, Morales wept, pausing to sip water and collect himself.

Assistant District Attorney Shannon Lucey argued in her summation that Morales had issues with his own sexuality and was jealous that Carson and Robinson were openly gay. Morales "has a lot of self-loathing issues," she said. "They're inside him and they came out when he saw Mark Carson and Danny Robinson be who they are in public."

New York's hate crime law doesn't say attackers need to be of a different ethnicity or sexuality than their victim.

Morales faces 30 years to life in prison if convicted.