Obama starts defining his new role in the age of Trump 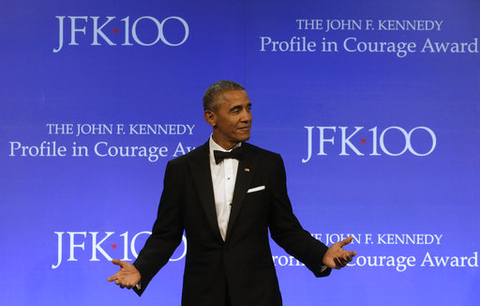 Former President Barack Obama walks toward a podium to address an audience after being presented with the 2017 Profile in Courage award during ceremonies at the John F. Kennedy Presidential Library and Museum. (AP Photo/Steven Senne).

WASHINGTON (AP) — Former President Barack Obama is starting to define his new role in the age of Donald Trump.

After dropping out of sight for a pair of glamorous island getaways, Obama is emerging for a series of paid and unpaid speeches, drawing sharp contrasts with Trump even as he avoids saying the new president's name. He's wielding his influence overseas, offering his support for some of the international political candidates who are clamoring for his endorsement. His aides are engaging in real-time political combat with Trump, including revealing Monday that Obama personally warned his successor against tapping embattled Michael Flynn as his national security adviser.

Obama's swift return to the spotlight has been cheered by some Democrats, who are still sifting through the wreckage of the party's crushing defeats in the November election. But the attention surrounding Obama has also magnified the vacuum for new Democratic leadership, a reality that aides say is not lost on the former president.

"He's acutely aware that when the former president speaks, he consumes a lot of the oxygen," said Eric Schultz, Obama's senior adviser. "He wants to make sure we make room for the next generation of leaders."

With that in mind, Obama is picking his spots carefully.

During a speech Sunday night in Boston, he urged members of Congress to have "courage" as Trump presses for the repeal of his signature health care law, recalling the Democrats who were swept into office with him in 2009, but lost their seats after casting votes in favor of the "Obamacare" measure. But he avoided a lengthy defense of the law Democrats muscled through in 2010 and did not critique the bill House Republicans passed last week.

In an unusual move for a former president — particularly one who just handed the White House to the opposing party — Obama taped a video endorsing Emmanuel Macron, the eventual winner of the French presidential election. He backed Macron after Trump appeared to side with nationalist candidate Marine Le Pen, calling her the strongest candidate on terrorism and borders.

Obama advisers say the former president is still navigating his role in international politics, but he is willing to consider requests for support from overseas candidates. Later this month, he'll appear alongside German Chancellor Angela Merkel, who faces elections later this year, for a panel on democracy.

Obama's stop in Germany will coincide with Trump's first visit to Europe as president, likely setting up a stark contrast between the 44th and 45th presidents on the world stage.

The former president is said to be reluctant to get into a tit-for-tat with Trump over every tweet or critique from the White House briefing room. But he has plenty of proxies willing to jump in for him, including on Monday, when three former Obama administration officials said Obama had personally warned Trump against hiring Michael Flynn as national security adviser.

Flynn, who is at the center of the controversy surrounding Trump's campaign and Russia, was fired after less than a month. The revelation from Obama advisers appeared to be sparked by Trump's attempts to shift some of the blame for Flynn's troubles to Obama by noting that the previous administration renewed the former military intelligence director's clearance even after he was fired in 2014.

Obama and Trump haven't spoken since the inauguration, though an aide said Obama would take Trump's call if the Republican reached out. The two spoke frequently during the transition, and Trump spoke about his surprise at their good relationship.

But Trump stunned Obama advisers with his March 4 tweets accusing Obama of wiretapping his New York skyscraper during the election, an explosive allegation that has been denied by FBI Director James Comey and other national security officials.

"I wouldn't say I've been exactly great to him, either," Trump acknowledged in a recent interview with The Washington Times.

Obama's re-entry in public life hasn't been all smooth sailing. He was sharply criticized by Massachusetts Sen. Elizabeth Warren and Vermont Sen. Bernie Sanders, his party's most prominent liberals, for his plans to receive $400,000 to speak at a September health care conference put on by the Wall Street firm Cantor Fitzgerald.

The former president is said to have been unbothered by the criticism. Still, he and wife Michelle Obama moved swiftly to announce a $2 million donation for a summer jobs program in their home town of Chicago.

Warren and Sanders represent one flank of the Democratic Party that's trying to take control as the party tries to rebuild ahead of the 2018 midterm elections. Obama is expected to campaign and fundraise for candidates as those contests draw near, but his supporters are clear-eyed about his own role as the party tries to recalibrate.

"The onus is on the next generation to lead the party in the Trump era," said Dan Pfeiffer, a longtime Obama White House and campaign adviser.