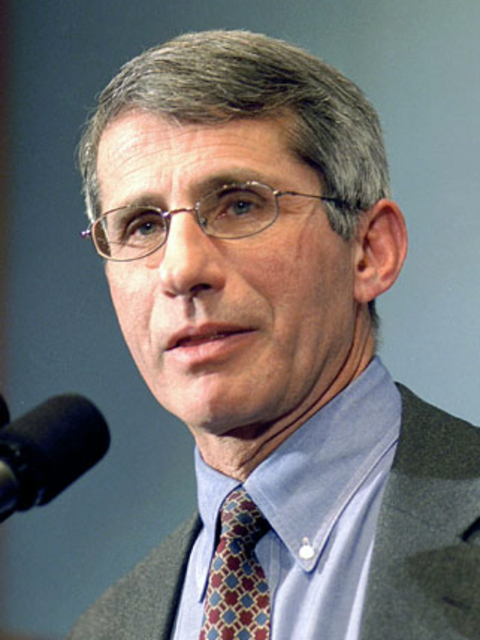 Ebola is not expected to ever be in the same league as AIDS in terms of infections and deaths, said Dr. Anthony Fauci, director of the National Institute of Allergy and Infectious Diseases. Official photo.

Comparisons between the two deadly diseases surfaced in the last few months as the Ebola outbreak escalated. Both emerged from Africa and erupted into an international health crisis. And both have been a shocking reminder that mankind's battle against infectious diseases can take a sudden, terrible turn for the worse.

In his three decades in public health, the only thing like Ebola has been the AIDS epidemic, said Dr. Tom Frieden, head of the Centers for Disease Control and Prevention.

"And we have to work now so this is not the world's next AIDS," he told a meeting of the world's economic leaders in Washington last week.

But Ebola is not expected to ever be in the same league as AIDS in terms of infections and deaths, said Dr. Anthony Fauci, director of the National Institute of Allergy and Infectious Diseases.

"There is no one that imagines that we're going to see tens of millions of people infected with Ebola," said Fauci, a longtime leader in the fight against AIDS.

This year's Ebola outbreak — the largest ever — has killed more than 4,500 people in West Africa. AIDS kills more than a million per year on the continent.

Both diseases are caused by viruses and spread through contact with bodily fluids, not the air, but health experts say the epidemics are more different than they are similar.

Ebola can be more infectious than HIV, according to Dr. Bruce Ribner, a physician involved in the care of four Ebola patients treated so far at Emory University Hospital in Atlanta.

Indeed, a patient in the throes of Ebola can have 10 billion viral particles in a fifth of a teaspoon of blood — far more than the 50,000 to 100,000 particles seen in an untreated patient with the AIDS virus. Even the skin of an Ebola patient can be crawling with the virus, according to Ribner.

Still, there are reasons to be more optimistic about Ebola than about HIV, the virus that causes AIDS.

Ebola was actually discovered before HIV. First identified in 1976 and named after a river in Congo, the virus has caused periodic outbreaks in Africa ever since. While a test was made to diagnose it, work on vaccines and treatments has been limited and difficult.

Ebola did not become an international epidemic until this year, when it unexpectedly mushroomed in West Africa. The rapid increase in cases — particularly in Liberia and Sierra Leone — led to the CDC's worst-case-scenario estimate that there could be as many as 1.4 million cases in those two countries alone by January.

But at least scientists had a running start against Ebola.

The beginning of the AIDS epidemic was more challenging. When clusters of cases were first reported in 1981, health officials were facing a mysterious illness with no known cause.

"We didn't know it was a virus. We had no idea what was going on," recalled David Celentano, who was a young AIDS researcher in the 1980s and is now at Johns Hopkins University's school of public health.

Scientists did not isolate HIV until a couple of years later. A test for the virus wasn't available until 1985. There's still no vaccine, but medications have allowed those infected to live longer and healthier lives.

In those first few years, AIDS was generally perceived as occurring mainly in gay men, intravenous drug users and Haitians who had recently entered the United States.

"There was kind of a sense that 'it's only happening in certain places, and it only happens to certain people,'" said Dr. Wafaa El-Sadr, a Columbia University professor who as a young physician treated AIDS patients in New York City.

It wasn't until the mid-1980s when public anxiety and fear about the disease in the U.S. really began to reach the levels seen today with Ebola. In 1985, an Indiana school barred a boy with hemophilia named Ryan White because he was infected through a blood transfusion. Later that year, a national poll showed more than half of Americans favored the quarantining of AIDS patients and 15 percent supported tattooing people who had AIDS.

Beginning in 1987, HIV-positive travelers were banned from entering the country. The rule was changed in January 2010.

Public anxiety about Ebola took flight in the last month with the first case diagnosed in the U.S. in a man who traveled to Dallas from Liberia. In the Dallas area, attendance dropped at schools where children attended who had reportedly been in contact with the man, Thomas Eric Duncan. At the CDC, calls and emails to the federal health agency spiked to more than 800 from a few dozen daily asking questions about the disease.

This past week, screening of travelers from West Africa began at five U.S. airports.

The international response also has been accelerated with Ebola, compared to AIDS. The United Nation's UNAIDS program didn't begin until 1995. Some experts feel real momentum in the international campaign didn't occur until 2000.

The Ebola response also has been faulted as dangerously slow, but it's been much faster than what happened with AIDS. In the last month — about six months after the epidemic in West Africa first began — officials from the United State and other nations have met to ratchet up an international response with money, troops and supplies.

The scariest thing about the Ebola virus is how quickly and dramatically it kills. Initial infection to ghastly death is only a matter of weeks.

That's different from HIV: An HIV-infected person may not have symptoms for years. And a decade may pass before an untreated AIDS victim dies. That means infected people can silently and unknowingly spread the infection for years.

HIV "is insidious," said Curran, who led the CDC's task force on AIDS in the mid-1980s.

Ebola's speed is more terrifying. But it also allows cases to be identified and isolated and contacts to be tracked down and monitored before they can continue to spread the disease.

"It potentially gives us a way to break the back of the epidemic," Curran said.