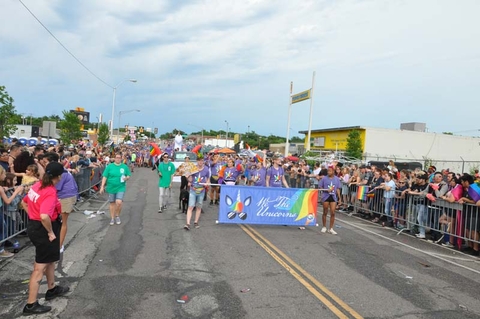 Scenes from the OKC Pride parade 2018. Photo by Robin Dorner.

“After an internal investigation into certain questionable transactions, a report was filed with the Oklahoma City Police Department in July 2018,” said Brandon Odom, interim president of OKC Pride. “After further investigation by OCPD, the District Attorney for Oklahoma County filed charges against Ms. Honeycutt in September.”

Since the case is a pending criminal matter, Odom said OKC Pride could not further comment.

As for the future of OKC Pride, Odom said, “It is most certainly our intent to continue with the activities OKC Pride has traditionally conducted in the past. However, our organization’s attention is presently concentrated on doing those things necessary to make OKC Pride a better organization moving forward.

“OKC Pride’s involvement in the festival and parade will be discussed [in 2019] once our organizational activities are completed.”

As of October 1, there are no paid members of OKC Pride Inc.

“According to membership rules, all memberships expired as of October 1, the beginning of the new fiscal year,” said Odom. “Dues paid mid-year follow the fiscal year calendar as well.”

Odom said there is also an overall concern for more community money to be tied up with no current results; membership has been suspended until after the first of the year.

“Members are a very important part of this organization,” he said.

The annual parade draws one of the largest crowds in Oklahoma City annually. Odom said this tradition would continue for the 31st annual OKC Pride as well.

“With full community support and a financial realignment, the sky is truly the limit for potential events.”

However, on Tuesday, December 11 at a regular meeting of the 39th St. District, a Pride Advisory Committee was formed by that organization.

“We have talked about it, but it feels like now is the time to set something up,” said Lauren Zuniga, 39th St. District Director. “I have had conversations with the Mayor, the Convention and Visitors Bureau (Visit OKC), the other stakeholders in the community and the consensus is they would like a point person and an organization they can trust that’s putting on the annual event for Oklahoma City.”

Zuniga continued, “And so it kinda seems like where Pride is right now, not a lot of progress has been made that maybe we need to take a bigger role in presenting that.”

John Gibbons, who later in the meeting was elected at the 39th St. District President, added, “The annual Pride event is a major and significant part of our schedule on a yearly basis that takes place on 39th St. They’ve had some challenges over the last short period of time.”

Gibbons said he reached out to the current OKC Pride President to offer assistance but said: “he did not want to talk to us.

“OKC Pride has no membership, no properly elected board, is thousands of dollars in debt and does not want our help,” Gibbons said. “At the very least, we [39th St. District] need to be prepared.”

Odom acknowledged in an unrelated statement, “Recent events within this organization have placed an undesirable filter over the spotlight on our community.”

However, the Interim President sees a bright future for OKC Pride.

“I believe utilizing the already established national network of Pride Board contacts (CAPI/InterPride), local non-profit advocacy such as The Center for Nonprofits OKC, and the talents of those within our community and allies, we can overcome this and promote intensely positive visibility for the future.

“Many Pride organizations around the nation have been through similar and worse, learned from it, made the changes necessary to correct/prevent, and have grown from it.

“I have faith this will be done. That faith in others is what keeps me going against some tough odds. The long-term potential is beyond a once a year event.”

The Interim President sees himself in the future of OKC Pride.

“If allowed to remain in my position, I intend to correct the wrong-doings and to build a solid foundation for OKC Pride, Inc.,” Odom said.

To contact either organization, OKC Pride: www.okcpride.com and new FB page at @OklahomaCityPride. For 39th St. District: www.39thstreetdistrict.com or @39thdistrictokc.