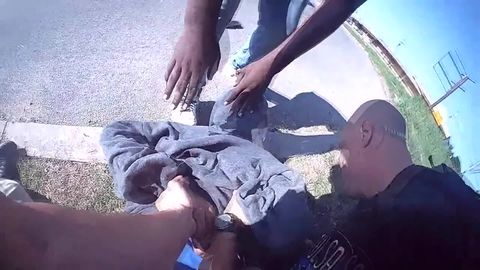 Last evening, the Oklahoma State Conference National Association for the Advancement of Colored People, (NAACP) along with coalition partners from across the state, released this statement calling for charges against the Tulsa African American teenager to be dropped. The teen was charged with jaywalking, assault and battery of a police officer, and resisting arrest.

"This arrest is illegal, and that the teenagers were walking in an area that doesn't have a sidewalk," said the release. "We are demanding that these police officers, be removed off the street before they decided to arrest or kill other African Americans."

The Okla. NAACP said the action of these officers was to "put fear" in the African American community that they would be arrested or killed if they were seen on the street.

On June 4, two African American teenage males appear to be walking down the street in the area, of North Osage Dr. and Newton St. in Tulsa, Oklahoma when they were stopped by Tulsa police officers, handcuffed, and one was arrested.

"What, I have seen from the news of those body cam videos was harassment and assault by these police officers. In the video, you can see and hear one of the teenagers asking, the officers why they were following them, and you can hear an officer reply, 'Because you were jaywalking, you broke the law, that's why.' You can also hear the teenager saying to the officers 'You guys harassing us for no reason, sir. We're just walking, man,' the second teen says before he is also handcuffed.

"These teenagers were not a threat to law enforcement, and these officers is clearly guilty of using excessive force. I have witnessed probably hundreds if not thousands of times, often right in front of police, how a white person can walk in the middle of the street, and not once have they been arrested, stopped, or even told they needed to get out of the road."

The Okla. NAACP said officers could have just said, "please get out of the middle of the street, and keep it moving."

"The two body-camera videos that were released show the teenager didn’t do anything wrong except walking while being black, and today, this will get you killed," said Anthony R. Douglas, President Oklahoma State Conference, NAACP.

Former South African Archbishop Desmond Tutu made this statement during his visit to Oklahoma, “Tulsa is sitting on a powder keg because it refuses to deal with its past; you all keep sweeping it under a rug. But if Tulsa could work together on race relation issues through reconciliation, Tulsa can become a jewel to the world,” Tutu affirmed.

The Oklahoma NAACP encourages people to join their local NAACP, and is asking for donations at www.oknaacp.org. They also encourage citizens to complete the census, reach-out to state and local elected officials, and to give your thoughts on this issue by casting your vote in November.

"Let us make a resounding noise together with our vote!"

The release ended with the phrases, "Stop killing us." “Black Lives Matter” “We are Done Dying."