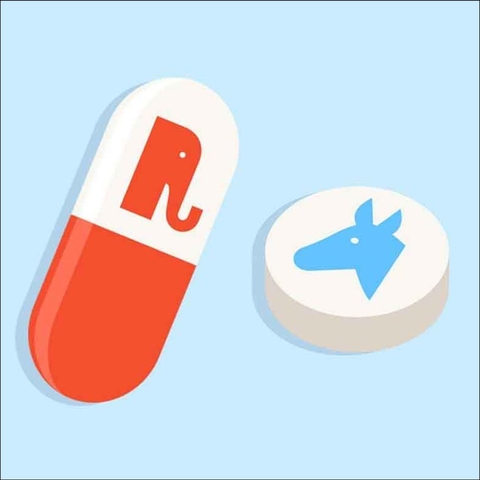 President Donald Trump's vague platitudes about "beautiful" and "very special" health care for everybody are not going to cut it in his 2020 re-election race -- after he was left exposed on the most urgent issue in American politics.

An ill-timed move by the Justice Department to back the invalidation of the entire Affordable Care Act offered a huge opening to Democrats and inadvertently revealed a gaping political vulnerability for Trump on Tuesday.

The sudden pile on by Democratic presidential candidates over the controversy, and the hurried scramble by Trump and his aides to clean it up, offered an eloquent forecast of just how important health care will be in 2020.

A court fight led by Republican attorneys general that precipitated the Justice Department policy shift could cause devastation in the health care market place and hit real-life coverage benefits for millions.

It could also explode into the most heated months of the 2020 presidential showdown if Obamacare's fate -- for the third time -- ends up before its previous savior, Chief Justice John Roberts and his Supreme Court.

By lunchtime, Trump's electoral antennae were twitching as the return of Obamacare as a driving political issue trampled all over his end-of-the-Mueller investigation victory party and hinted at trouble ahead.

"Let me tell you exactly what my message is: The Republican Party will soon be known as the party of health care," Trump told reporters in a Senate corridor during a visit to consult Republican lawmakers. "You watch."

It was the kind of sweeping, non-specific promise that helped Trump ride out the 2016 presidential race combined with base-pleasing threats to eradicate the proudest domestic accomplishment of his predecessor Barack Obama.

But Tuesday's events were the first real sign that such an approach will not sustain Trump in his re-election race.

That's partly because Trump is now the personification of the government -- he bears responsibility for the state of the health care industry and the struggle many Americans are facing in affording spiraling costs of treatment.

Their plight has hardly been eased by the GOP, which wasted two years of ultimately futile efforts to completely repeal Obamacare when it enjoyed a monopoly on power in Washington.

Given how entrenched Obamacare has become, he is also in the position of looking like a leader trying to eradicate benefits -- not provide new ones.

Trump's unwillingness or inability to offer a comprehensive plan of his own to improve the health care of Americans, other than his campaign trail hyperbole, hampered the repeal efforts to the GOP in the House and the Senate.

When Trump does talk about health care, it's mostly when he's lashing out at the late Republican Sen. John McCain for casting a crucial vote against repealing Obamacare, rather than offering a comprehensive plan.

Trump's 2020 campaign website boasts about promises kept -- including the repeal of Obamacare's individual mandate requiring the purchase of health insurance. But the listed achievements include plans like the multi-billion dollar effort to combat opioid abuse, which though worthy, does not come close to an explanation of how the health care system would work if the ACA is finally killed off.

It's a big risk for Trump because voters are hungry for health care solutions.

In the midterms, 41% of voters said health care was the most important issue facing the country. Three-quarters of that number said they supported Democrats. Obamacare, so long an albatross for Democrats during the previous administration, is now much more popular than it was, despite its failure to provide all middle-income Americans with affordable options.

A recent Kaiser Family Foundation survey found that in 21% of counties in the nation, a 40-year-old earning $50,000 would have to spend 10% of their income just to pay for ACA premiums.

Such headaches are helping to drive the early stages of the presidential race and help suggest why Trump, while currently vulnerable on the issue, could reap some political advantage with a serious effort to address the crisis.

From a political perspective, the administration's revival of the health care debate was a disaster.

It did not just distract from the President's attempt to make political capital out of an apparently favorable result from special counsel Robert Mueller's Russia investigation, at least according to a summary by Attorney General Bill Barr. It must also have irked Trump that he was still being forced to deal with Obamacare itself.

His frequent references to his predecessor leave no doubt about the importance he attaches to destroying Obama's legacy.

But through successive elections, Supreme Court challenges and during the GOP Capitol Hill majority, Obamacare stubbornly clung to life.

If Trump fails to win a second term, the law will likely outlast his political career.

Since there is little prospect of serious health care reform -- possibly with the exception of a bipartisan bid to lower the cost of drugs -- in the current divided government in Washington, health care is sure to dominate the 2020 campaign.

A win-win for Democrats

Tuesday's wrangle over the ACA also had another political dimension -- it let Democrats off the hook.

The push left by Democratic presidential candidates and the embrace by some of single-payer proposals like "Medicare for All" opened a lane for the GOP to use health care to claim their opponents had embraced "socialism."

But the Justice Department changed the shape of the health care debate and allowed Democrats off the defensive. They again stressed the mantra that Trump is bent on ripping health care away from Americans.

The steep cuts to Medicaid and Medicare unveiled in Trump's 2020 budget unveiled this month only bolstered the attacks of eager presidential candidates.

Sen. Bernie Sanders of Vermont tweeted that Trump wanted to "throw millions of Americans off health insurance and put lives at risk," and pledged to fight back.

Massachusetts Sen. Elizabeth Warren tweeted, "Health care is a basic human right, and we fight for basic human rights." Former Texas Rep. Beto O'Rourke vowed on Twitter to "protect the care of those whose lives depend on it."

House Speaker Nancy Pelosi also may not have been able to believe her luck -- as the administration handed her a way out of her dilemma of how to balance the apparently inconclusive outcome of the Russia probe with demands by a small but vocal faction of her caucus for impeachment.

She could simply talk about something else -- health care -- which is all but certain to be more important to voters come 2020 than Russia.

"Last night in federal court, the Justice Department of the Trump administration, you'd think they'd have more to do, decided not only to try to destroy protections for pre-existing conditions, but to tear down every last benefit and protection the ACA affords," Pelosi said.

"The GOP will never stop trying to destroy the affordable health care of America's families."

Were it not for the Justice Department's move, Pelosi's dance would have been far more delicate as she unveiled a new plan on Tuesday to strengthen the ACA and to reverse some changes made to the law by Trump.