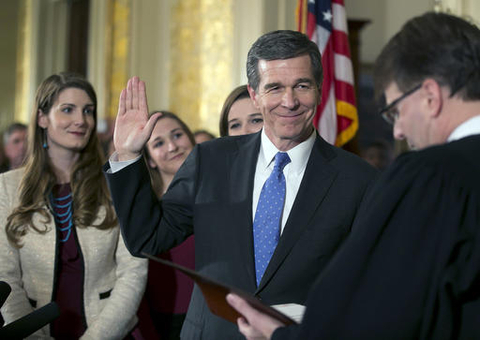 Roy Cooper is ceremonially sworn in as Governor of North Carolina. Robert Willett, The News & Observer via AP, File.

Cooper won the latest battle Wednesday as a three-judge panel temporarily blocked a new law that required Senate confirmation for the governor's Cabinet members, using a process similar to what the U.S. Senate does for the president's Cabinet choices.

The state law was passed in the waning days of GOP Gov. Pat McCrory's administration and seen by Democrats as a way to undermine the new governor's authority. Cooper sued over this and other laws that reduced his powers after he was sworn in Jan. 1.

The decision by the judges was released an hour before senators were scheduled to question Cooper's pick to lead the department of military and veterans' affairs, but he was absent. Committee co-chairman Sen. Wesley Meredith read a brief statement in which he said senators would still get answers about the qualifications of secretaries and the meeting abruptly ended.

Cooper appointed eight of his 10 Cabinet members before the legislature came into session in January and they were sworn in. Some legislators call them acting heads. Under the law passed in December, they can be dismissed if the Senate does not confirm them.

While the agency leaders wonder about their jobs, the standoff hasn't halted state government operations. But this much remains certain: the court battle has kept the rancor between Cooper and the General Assembly front and center.

The three Superior Court judges have scheduled another hearing in the case Friday and will decide whether to postpone enforcement of the law until they can reach an ultimate decision.

Republican leaders called the judges' decision "a blatant overstep of their constitutional authority."

House Speaker Tim Moore and Senate leader Phil Berger said in a joint statement, "if these three men want to make laws, they should hang up their robes and run for a legislative seat." Berger and Moore also said "their decision to legislate from the bench will have profound consequences." They didn't explain further.

Cooper said the court "should not be intimidated by threats from legislative leaders."

"We need to put these partisan confirmation games behind us" and pass other legislation, Cooper said, including the repeal of a law limiting LGBT rights and which public bathrooms transgender people can use, known as House Bill 2.

The GOP-led General Assembly and the governor have been fighting in court on other matters. The same three-judge panel blocked another new law that shifted oversight of elections away from the governor and toward the legislature. In federal court, a judge agreed with Moore and Berger last month and blocked attempts by Cooper or President Barack Obama's administration to approve Medicaid expansion in the state.

Republican lawmakers say the state Constitution gives the senators "advice and consent" powers over gubernatorial appointments. The leaders say the public has the right to see a governor's Cabinet face questions in an open forum.

Senators have laid out a schedule to examine Cooper's eight picks through mid-March. They said they weren't aiming to be confrontational and wanted to determine if Cooper's choices were capable of performing the job, lacked conflicts of interest and planned to follow the law.

"The nearly identical federal process that is taking place in Washington, D.C., even as we speak shows the public is paying attention and we ought to do everything we can to give the people confidence that our state leaders will be accountable to them," said Meredith, a Republican.

Wednesday's meeting led by Meredith provided some made-for-TV drama. People with cameras ran in the crowded hearing room as Meredith spoke to colleagues and a separate table with a placard identifying Larry Hall, Cooper's secretary for military and veterans' affairs. The seat at the table was empty.

Democratic Sen. Floyd McKissick said the committee should have never met Wednesday. "It was absolutely a charade to even come in here," he told reporters.
_