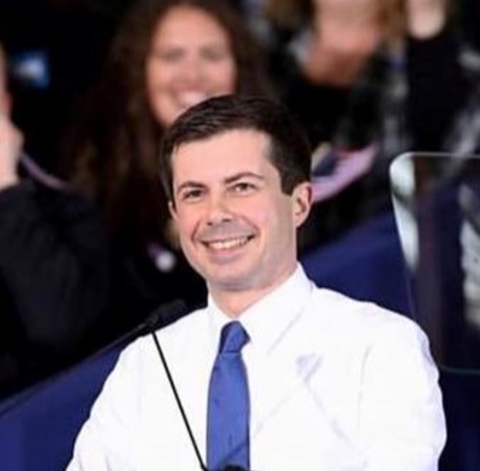 At one event, the hecklers invoked the biblical cities of Sodom and Gomorrah, which were destroyed because of the sexual behavior of the residents who lived there.

Buttigieg is gay and has talked openly about his Episcopalian faith. The Democratic presidential candidate sought to dispatch the disruptions without attacking the demonstrators, but did acknowledge the disturbances and, at one point, the fact that the men had the right to voice their opinion.

"The good news is, the condition of my soul is in the hands of God but the Iowa Caucuses are up to you," Buttigieg said.

Interruptions at political events are common during the course of a campaign. Former Rep. Beto O'Rourke, Sens. Cory Booker and Bernie Sanders have all had protesters yell at them this year. But the anti-gay nature of the chants aimed at Buttigieg on Tuesday made the disruptions more personal.

Anti-gay sentiment has coursed through Iowa politics for years, particularly among some vocal social conservative groups, but the state was among the first to legalize same sex marriage 10 years ago, something that Buttigieg acknowledged on Tuesday. It's long been a hot-button topic in Des Moines, where several gay Democrats have been elected to local and state offices.

But Buttigieg's protesters -- led by anti-abortion activist Randall Terry -- came from out of state to attack the presidential candidate. Terry was seen driving a large RV past the event after the event concluded.

Terry said after the protest that he had also disrupted an event for Booker earlier on Tuesday but that he planned on attending as many Buttigieg events as possible.

The first disruption came in Fort Dodge, Iowa, where a man at the roughly 100-person event stood up and yelled, "We will not stop, he is misleading our children."

The man was shouted down by the audience and once he was removed from the event, Buttigieg said, "We are so dug in in such passionate ways."

Two protesters interrupted Buttigieg's next event in Des Moines by yelling "Remember Sodom and Gomora" at different times during the event.

The repeated chant refers to two biblical cities where, according to the biblical book of Jude, the residents "indulged in sexual immorality" and, as punishment, would "serve as an example by undergoing a punishment of eternal fire."

Both men yelled for a prolonged time, but they could not be heard over the chants from the audience.

Buttigieg told CNN on Tuesday that he would "prefer to have those kinds of debates in a respectful format, versus through interruption, but a president is going to have to deal with tougher things than being interrupted in a speech."

"It is what it is," he said as he talked to voters after the event.

The mayor added that he didn't get a lot of that during his time in South Bend.

"We are all from the same community so maybe it is a little different. There was some nonsense. There always will be," he said. "I get the sense that folks here believe in respectful debate. We can have respectful debate all day. But ideally without interrupting one another."

A voter asked Chasten Buttigieg, the candidate's husband, about the hecklers after the event, too.

"We are beyond divisiveness," he said. "That is what we are out here to talk about."

The once little known Buttigieg, after a well-reviewed appearance at a CNN town hall in March, has seen a surge of momentum in his presidential campaign, leading up to his official announcement on Sunday in South Bend.

The mayor has made his sexuality, his marriage and his religion part of his pitch to voters.

Buttigieg came out in 2015, months before he was re-elected as South Bend's mayor. He has talked about the fact that he was uncomfortable with being gay early in his life and told an audience at an LGBTQ event earlier this month that "if you had shown me exactly what it was that made me gay, I would have cut it out with a knife."