Planned Parenthood president stepping down in 2018 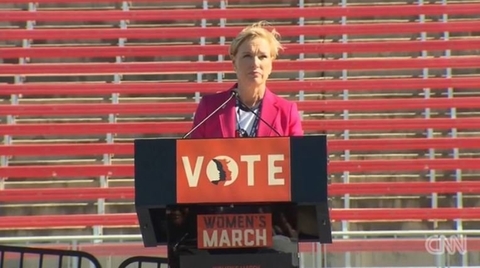 (CNN) -- Planned Parenthood President Cecile Richards will step down this year, she announced in a statement on Friday.

"Leading Planned Parenthood over the last 12 years has been the honor of my lifetime," she said. "Together, we have made real progress in this country, expanding access to services and making reproductive rights a central priority of our nation's health care system. I'm deeply proud of the progress we've made for the millions of people Planned Parenthood health centers serve across the country each year."

During her tenure, which began in 2006, Richards -- a Hillary Clinton supporter -- helped elevate the profile of Planned Parenthood, which has been the subject of criticism by anti-abortion organizations, which have called on the government to strip the organization of its funding.

Her announcement comes just one week after the anniversary of the Women's March. Richards marched in New York on Saturday and spoke at the Women's March "Power to the Polls" rally in Las Vegas on Sunday.

"Last year, we dared to hope for a better, brighter, more inclusive world," Richards told the audience in Las Vegas. "This, year we're going to go out and build it. And if we dare to be powerful, and if we use our strength in service of our vision, nothing and no one can stand in our way."

When asked by CNN at the rally what she's most fired up about in 2018, she said it's important to "start shining a light on what's happening in this White House." She also emphasized the importance of the midterm elections next fall.

"We have to get our revenge in November," she said. "Women will vote, and women will change who's in office. I don't think elections are the end all, though. I think actually 2018 is going to be an interesting sort of accountability assessment for 2020."

She also touched on the power of women in an op-ed for CNN last week. Her departure comes at a time when abortion rights are increasingly under pressure from conservatives and the Trump administration.

Trump was the first sitting president to address the march, which has taken place every year since 1974. During his speech, he touted his administration's anti-abortion policies, which he said "are protecting the sanctity of life."

Richards has previously shot down questions about running for office (she told People last year that "it's not my best use"). But some speculate that the daughter of the late former Texas Gov. Ann Richards might one day change her mind.

In an appearance on "The Daily Show" on Thursday, she was also vague about her future.

"I don't know what my future holds, but I've been fortunate enough to be a troublemaker my whole life," she told host Trevor Noah, after he asked whether she's considering a run for office. "Whatever I do in my lifetime I've always been incredibly privileged to make a difference in the lives of folks who just need a break"

Her memoir, titled "Make Trouble," is expected to hit bookshelves in April.