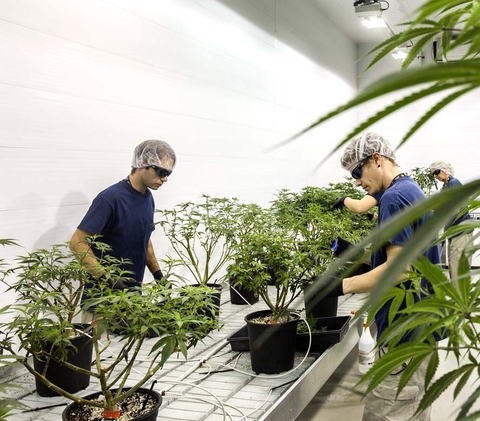 For decades, though nobody was really sure why, April 20 has been the unofficial holiday for marijuana users and a joke by and about them.

READ: The origin of 420; a time to come together

Now, though, it's also a reminder of how quickly marijuana is moving from illegal and a joke to a multi-billion dollar legal business — and a good time for us to take another look at how well cannabis stocks have been doing.

Cannabis has also gone mainstream thanks to big investments and partnerships between marijuana sellers and blue chip consumer companies.

But many of these stocks have soared this year already — Cronos is up nearly 60 percent so far while Canopy has gained 70 percent — leading to questions about whether this is just a speculative mania like tulips and dot-com companies.

"This business is still in its infancy. It's like investing in alcohol post-Prohibition. There will be tons of growth," said Dan Ahrens, chief operating officer with investment firm AdvisorShares. "But there are going to be home runs and there will be lots of strikeouts."

Ahrens thinks that investors need to be patient and selective. But he believes they will be rewarded — that is, if they wind up picking the winners.

"These are new, up and coming companies. There is going to be volatility so you have to be selective," Ahrens said, adding that he favors companies that haven't already shot up because they've done big deals like Canopy and Cronos have.

AdvisorShares just launched the Pure Cannabis ETF, an actively managed fund that invests in cannabis stocks. Some of its top holdings are Canadian cannabis companies CannTrust, Aphria and Hexo.

Rob Almeida, global investment strategist with MFS Investment Management, said investors may be getting ahead of themselves. He's worried that cannabis stocks are going to turn out to be an investing fad like 3D printing and blockchain companies.

"Cannabis is not going to have parabolic growth," Almeida told CNN Business. "There is a lot of hope and enthusiasm."

One cause for concern: Now that more states are legalizing marijuana use, prices are dropping as competition has increased.

Research firm BDS Analytics, which calculates a consumer price index for the cannabis industry in the United States, recently reported that overall prices in February for products such as ingestibles, topical creams, vaporizers and vape pens and pre-rolled joints, fell 2.7 percent from February of 2018. Prices were down nearly 2 percent from the prior month.

Many of the publicly traded cannabis companies have been reporting a drop in the retail price in Canada since legalization last October as well.

Aphria, for example, reported sales this week that missed forecasts. Shares plunged nearly 15 percent on the news. But the stock is still up more than 40 percent so far in 2019.

More deals likely on the way

A lot of the excitement has to do with expectations of more mergers and partnerships. Aurora Cannabis, a Canadian company whose stock has soared 80 percent this year, recently announced that it was adding legendary investor and deal maker Nelson Peltz as an adviser.

That's led to speculation that Peltz may help Aurora team up with a consumer products or healthcare company. Tilray, for example, also has a strategic relationship with generic drug maker Sandoz, a subisidiary of Novartis. So other cannabis firms may look to team up with Big Pharma.

Canopy's plans to buy Acreage could lead to another wave of consolidation too.

Matt Hawkins, managing principal at Cresco Capital Partners and an investor in Acreage, said in an email to CNN Business that "this is the moment the cannabis sector knew was coming -- consolidation."

Hawkins added that the deal "will lead to a rush of cannabis companies merging in order to compete with Canopy/Acreage" and that "it's now going to be very hard for early start-ups to enter the space and compete with the growing/emerging conglomerates."

In other words, there's another sign that cannabis is going legit: It's starting to function just like any other major consumer industry.