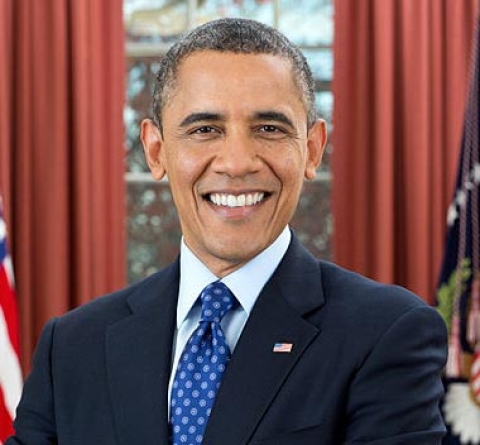 President Obama made many campaign promises in 2008 and again in 2012. This story is a summary of how he has delivered. Official photo.

WASHINGTON (AP) — Absent a magic potion or explosive economic growth, it was all but inevitable President Barack Obama would have to break some of his campaign promises to keep others. If there's one thing that distinguished them besides their ambition, it was their incompatibility.

Cut a staggering $4 trillion from deficits while protecting big benefit programs, subsidizing more health care, plowing extra money into education and avoiding tax increases on everyone except the rich? Not on this Earth.

The postelection reality is starting to shake out now, though how it will all settle can't yet be known.

To reach for his promised deficit reduction, Obama has proposed breaking his tax promise. Toward the same end, his pledge from four years earlier that he wouldn't trim cost-of-living benefits in Social Security has given way to a proposal to do just that.

Republicans, who oppose tax increases, and Democrats, who object to curbs on entitlements, could block his path and in doing so save Obama from breaking his own promises.

If they do, though, that big pledge to bring down deficits by $4 trillion would surely have no hope at all.

That's the overarching dilemma in a catalog of campaign promises facing varying prospects over the next few years.

Obama is driving toward success on his energy goals. He's got a decent chance of achieving an immigration overhaul. Activists who once ridiculed his promise to be a "fierce advocate" of gay rights say he's come around and become just that.

Much else is bogged in the budget swamp or is a nonstarter for one reason or another. Anything costing big money comes with big obstacles, and one promise that cost relatively little, gun control, is dust. Yet Obama, in powering through with his health care overhaul, financial regulation and stimulus spending in his first term, has shown that tough causes aren't always lost ones.

A look at Obama's leading promises and what's happening with them:

The promise: Cut deficits by $4 trillion over a decade.

Prospects: Deals with Congress to cap spending and raise taxes on wealthier people, along with the resulting savings on interest payments on the debt, have already achieved a projected $2.6 trillion in deficit reduction for the years ahead. But the rest of the $4 trillion will be tough. To get there, he proposes a 10-year $583 billion tax increase, an additional layer of tax increases from slower indexing of tax brackets for inflation and modest curbs to federal health care programs, all helping to produce further interest savings.

Republicans are so far standing firm against further tax increases and liberal Democrats are a tough sell on trimming entitlement programs and other spending. This, as the Congressional Budget Office warns that "such high and rising debt would have serious consequences" if unchecked. Among those consequences are reduced national savings and investment, a potential fiscal crisis and higher interest costs for the government.

The promise: An approach to deficit reduction that doesn't undermine the recovery or unduly burden the middle class. Also, cut some corporate tax rates, penalize those who shift work overseas and create 1 million manufacturing jobs by 2016.

Prospects: Obama has had mixed success cutting the deficit without slowing growth. He struck a deal with Congress to avoid the "fiscal cliff," a set of tax increases and spending cuts in January. Businesses responded by stepping up hiring and spending.

But he and Republican leaders allowed Social Security taxes to rise, cutting take-home pay for nearly all working Americans. He wasn't able to avoid $85 billion in automatic spending cuts that started March 1.

Manufacturing has been creating more jobs but adding 1 million more by 2016 is unlikely. That would require 250,000 new factory jobs per year, nearly double the current pace. Overall, the unemployment rate dropped to 7.5 percent in April, the lowest in four years of recession and ragged recovery. The economy is growing modestly but steadily. It expanded at a 2.5 percent annual rate in the January-March quarter.

The promise: Raise the high school graduation rate from 78 percent to 90 percent by 2020 and make the country No. 1 in college graduates by that year. Cut federal money to colleges that don't control tuition costs.

Prospects: A rocky path at best. There's little momentum in Congress for the spending required, his pledge to make the U.S. first in college graduates is a long shot and tuitions are climbing without the promised federal penalty.

Obama has proposed $36 billion for Pell Grants in 2013. Yet those grants now cover less than one-third of the cost of a four-year public college. In 1980, they covered 69 percent of the costs.

Prospects: He could well deliver on this promise. New drilling technologies have unlocked enormous domestic reserves of crude oil and natural gas. Policies that mandate increasing use of renewable fuels and better vehicle fuel economy have helped slash demand. That has translated into a dramatic reduction in oil imports and increase in diesel and gasoline exports.

But oil and gasoline are global commodities. If Mideast turmoil disrupts oil production there, prices worldwide will rise, even if the U.S. gets little or no oil from that region. The U.S. economy won't ever be free from the effect of high oil prices. It just may be able to get much less oil from abroad.

The promise: No cuts in Social Security cost-of-living increases. Protect Medicare from Republican proposals to turn it into a voucher-like program.

Prospects: Obama is ready to break his Social Security pledge from the 2008 campaign. He favors a new measure of inflation that would gradually trim benefit increases in Social Security, Medicare and other programs. The change, if adopted, eventually would cut Social Security benefits $560 a year for an average 75-year-old, $136 for a 65-year-old.

His approach to Medicare savings is different from one proposed by House Republicans to transform the program. He'd cut Medicare payments to service providers and is proposing that a growing share of seniors pay higher premiums over time, based on their incomes. Such Medicare changes were foreseen before the 2012 election. Meantime, Washington is expanding Medicaid to bring in more of the low-income uninsured.

For years, budget hawks have insisted that huge entitlements must be on the table for true fiscal discipline to be achieved. They're on the table now.

The promise: Be a "fierce advocate" for gay rights. Obama endorsed gay marriage in 2012.

Prospects: The course for gay marriage will be shaped by the Supreme Court, expected to rule on the matter in June. It's allowed in 10 states and the District of Columbia; many other states seem unlikely to follow suit unless forced by Congress or the court. But cultural attitudes are changing, as did Obama's views. His administration argued in favor of gay marriage rights to the court.

It seems unlikely the court will order gay marriage to be legalized in all states but its ruling could help same-sex married couples on estate taxes, Social Security benefits and other tangible matters. In his first term Obama lifted the ban on gays serving openly in the armed forces.

The promise: "Continue to reduce the carbon pollution that is heating our planet."

Prospects: Obama probably will take more steps to reduce the pollution blamed for climate change, but they are unlikely to be of the scale needed to help much in slowing the heating of the planet. Any policy to reduce heat-trapping pollution will target coal burned by power plants and oil refined for automobiles; those industries have powerful protectors in both parties.

Obama has acted on his own, to increase mileage standards and impose pollution control on future power plants. More such executive action is likely; a law is not.

The promise: Ban assault weapons and high-capacity ammunition magazines, expand background checks, and more, a postelection pledge made after the massacre at Sandy Hook Elementary School in Newtown, Conn.

Prospects: Obama said he would "put everything I've got into this." His everything wasn't enough. Entrenched support for gun rights and a powerful campaign by the National Rifle Association blocked efforts to pass a single aspect of Obama's package, the first attempt to significantly change the nation's gun laws in over two decades.

Polling found as many as 90 percent of those questioned supported expanded background checks, but even that fell short in the Democratic-controlled Senate.

The promise: Ensure access to affordable insurance for all and no gutting of Medicare or Medicaid.

Prospects: Obama is likely to achieve his goal of extending coverage to the uninsured. Affordability is another question. Costs are expected to go up, not down, contrary to what Obama promised in his first term.

The promise: Overhaul the immigration system to provide eventual citizenship to those who came here illegally, tighten borders and smooth legal immigration.

Prospects: Obama failed to deliver on his first-term promise to rework immigration law. His chances of pulling that off are much better now.

Even with a bipartisan Senate group having released legislation to accomplish those goals, however, success is not certain. Even so, the political climate is ripe for change thanks to a shift in Republican attitudes in 2012, when Latino and Asian voters backed Obama in record numbers.?

The promise: "Do what we must to prevent Iran from obtaining a nuclear weapon."

Prospects: Sanctions are destroying Iran's economy but not its will to enrich more uranium. By his own timeline, Obama has about a year left to see if diplomacy and sanctions can get Iran to slow its enrichment of uranium and assure the world its nuclear program is peaceful. If the U.S. and its partners cannot succeed, the stage may be set for an American or Israeli military intervention.

Prospects: Obama's 2014 budget, if passed, would break his promise to avoid any tax increases for middle and low-income people. He proposes a new inflation yardstick that would expose most people to higher income taxes, especially poorer workers.

He kept his promise to raise taxes on the rich, though at different income levels than he laid out in the campaign: $400,000 for individuals, $450,000 for couples. Republicans dismiss his proposed minimum rate for millionaires as a gimmick.