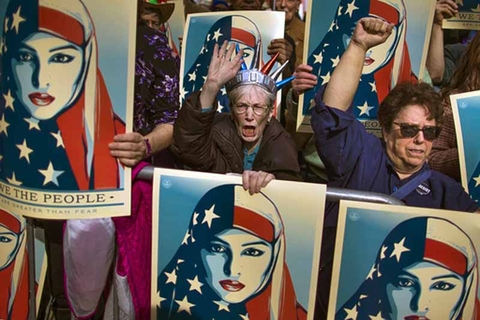 Washington (AP) — President Donald Trump's travel ban has been frozen by the courts, but the White House has promised a new executive order that officials say will address concerns raised by judges that have put the policy on hold.

The first order was met by legal challenges, confusion at airports and mass protests. The White House has forecast smoother sailing the second time around. White House press secretary Sean Spicer predicted last week "it will be implemented flawlessly" because of the due diligence of officials.

But no matter what the new policy says, lawsuits challenging its aims are expected.

Questions and answers about the path ahead:

When is the order coming, and what will it say?

The White House says it expects to issue a new order this week.

Trump aide Stephen Miller said at a Fox News town hall last week that the new order would be very similar to the first, with "mostly minor technical differences" in response to opinions by judges who have blocked it.

The Justice Department has said the Trump administration would be abandoning the original order, which should render moot ongoing court challenges to that order. But the president and the White House press secretary have also recently said that they intend to fight for the merits of the original order in court, even as they draft a replacement.

On Monday, the San Francisco-based 9th U.S. Circuit Court of Appeals denied a request from the Justice Department to put Trump's travel ban case on hold until he issues a new order.

The new order could go into effect immediately and would not be blocked by the court ruling that has kept the existing order on hold, said David Levine, a professor at the University of California, Hastings College of the Law in San Francisco. Levine said new regulations and laws are assumed to be legal until a court says otherwise. "It's valid unless it's invalid," Levine said.

Can we expect court challenges to the new order?

Four officials told The Associated Press on Tuesday that the new order will remove Iraq from the list of countries facing a temporary U.S. travel ban. Citing the latest draft in circulation, they said the document also no longer singles out Syrian refugees for an indefinite ban and instead includes them in a general, 120-day suspension of new refugee admissions.

The officials spoke on condition of anonymity because they weren't authorized to discuss the order before it is signed.

There are likely to be various, other technical changes to try to head off any attempt by Washington state and Minnesota, the two states whose lawsuit led to a court order that halted the order, from moving quickly for a court order putting any new ban on hold.

In refusing last month to reinstate the travel ban, which a judge in Washington state had blocked from taking effect, the San Francisco-based 9th U.S. Circuit Court of Appeals identified "significant constitutional questions" with the administration's plan to temporarily suspend the refugee program and to halt immigration from seven Muslim-majority nations.

The new order maintains the ban for the other six countries — Iran, Libya, Somalia, Syria, Sudan and Yemen.

It's hard to imagine a "bulletproof" order that could assuage the concerns of the immigrant rights community and other potential challengers, said Jon Michaels, a UCLA law professor.

"My sense is, there will be challenges, and challenges will be, at the very least, plausible challenges," Michaels said.

A repeat of the chaos that the original order sparked is possible, said University of Texas law professor Stephen Vladeck. "It will surely be a mess," he said. But the administration insists that won't be the case.

Spicer said last week the administration has "sought feedback and guidance and done this in an unbelievably comprehensive way" to make sure the agencies implementing the new order know what's happening.

He said the administration is expecting potential new court challenges, but suggests the White House will be better prepared.

Will the new one pass constitutional muster?

The 9th Circuit decision, for instance, said the first order may have violated the constitutional rights of green-card holders to notice and a hearing before their travel was restricted. Any new policy may have to address that concern to be viable.

The Justice Department has argued that a ban that exempts green-card holders and focuses only on foreigners from the seven nations who have never entered the U.S. would be entirely legal. But the court said Washington state and Minnesota might have a valid claim that even some of those foreigners have a constitutional right to challenge the ban.

Foreigners outside the United States have, at best, limited rights to sue in U.S. courts.

To beat the religious discrimination argument, the government may also have to overcome statements outside of court by Trump and aides, including former New York Mayor Rudy Giuliani. Challengers of the ban have held those statements up as evidence of discriminatory intent.

The statements include Giuliani's claim that Trump had asked him how to legally pull off a "Muslim ban," and Trump's own interview statements that Christian refugees had been disadvantaged. The 9th Circuit did not fully address the issue, but did note that courts assessing the motive of a government action can take into account statements by decision-makers.

Those statements hinting at intent may prove hard to dispose of even if the policy changes, said Chris Edelson, an expert on presidential power at American University in Washington, D.C.

If the original executive order is formally rescinded and replaced, as is the prerogative of a president, then lawsuits challenging it would be effectively nullified as the focus turns to the new policy, legal experts say.

Even so, arguments made by lawyers for Washington state and Minnesota that appeared to sway the 9th Circuit could easily be recycled in another or amended legal challenge.

But it may not be that easy for the administration to escape the shadow of the current challenge before the 9th Circuit, said Simona Grossi, an expert in federal court procedure at Loyola Law School in Los Angeles.