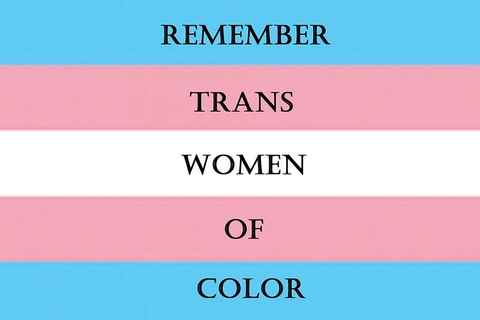 Those rates are troubling, and advocates/activists are calling for more media coverage and attention. If there is no attention brought to this issue, then we cannot even begin to eradicate it. Unfortunately, they are targeted, attacked and then treated as if their lives don’t matter.

I want to find ways to stop the violence while honoring them and keeping their memories alive.

In general, when a black woman of color is murdered, it is not covered by mainstream media. When you add the element of being trans, the coverage lessens.

Many trans POC are shunned by their families, and sometimes the families are ashamed therefore they do not push investigations. Even within the LGBTQ+ community, trans POC, especially trans women of color, are bullied and belittled. I have seen it. I have heard it.

Let’s face it; our society does not do a good job of protecting women. We are more vulnerable to sexual assault, domestic violence, and are more likely to be killed by someone we know than men.

All these things affect black women (trans women included) at higher rates than white women. On this Transgender Day of Remembrance, we should aim not only to remember them but to make the commitment of fighting for trans women of color by making their issues more visible.

I am not trying to neglect our trans males of color. I know that they, too, struggle and face violence. I hold them up as well.

I could not write this article without thinking about a beautiful soul we lost in Oklahoma due to violence. In November 2017, Brooklyn BreYanna Stevenson was murdered in Oklahoma City and was the 25th trans person killed last year.

I was honored to meet her mother, Vivian Stevenson, when she marched with The Gayly in this year’s OKC Pride Parade. Vivian has a smile that lights up the atmosphere just like Brooklyn’s. I reached out to her and asked what she wants people to remember about Brooklyn.

“Brooklyn was a loving, caring, fun-loving daughter, sister, aunt and a friend. She never met a stranger, and if you were blessed to have made her acquaintance, then you know that describes her spirit.

“Brooklyn lived her truth daily and unapologetically. It saddens us that her light no longer shines, but we are at peace knowing we will see her again.”

Miss Vivian, your daughter’s light continues, and I will never forget her. Brooklyn has a room dedicated in her name at the Diversity Center in OKC. A plaque with her picture remains on the wall for all to see. I hope justice is brought to Brooklyn soon.

Let us remember all the trans women of color and let their memories shine through our advocacy, understanding and love.