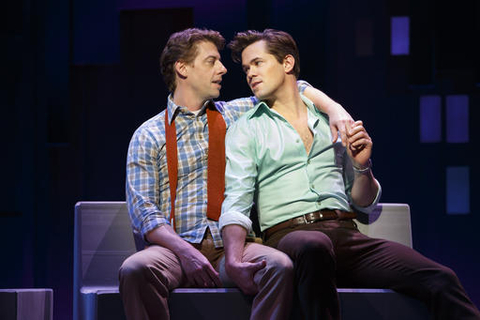 This image shows Christian Borle, left, and Andrew Rannells of “Falsettos” during a performance on Broadway at the Walter Kerr Theatre in New York. AP File Photo.

NEW YORK (AP) — Once upon a time, AIDS hadn't happened yet, there were no legal LGBT rights, and openly gay partners were just beginning to seem possible.

Composer-lyricist William Finn illuminated the story of a gay Jewish man and his extended family in the late 1970s with inventive lyrics and spirited tunes in the sophisticated musical comedy "Falsettos." Groundbreaking for its time, it premiered on Broadway in 1992 amid the growing AIDS crisis, and won two Tony Awards for best book and best score.

The book is co-written by Finn and James Lapine, who directed the original and also expertly helms this complex, fast-paced production. The almost entirely sung show, enlivened with Spencer Liff's sprightly choreography and a small but mighty orchestra, focuses playful wit on tumultuous relationship dynamics. The adults' immaturity is reflected in the set, a cube comprised of oversized building blocks.

"Falsettos" is a bittersweet pairing of two of Finn's one-act musicals "March of the Falsettos" and "Falsettoland." The first act is a domestic drama with humorous twists, as selfish protagonist Marvin (Borle) leaves his confused wife (Block) and precocious son to live with his male lover, Whizzer (Rannells) in 1979. Marvin wants everyone to get along like a family, but his immaturity prevents him from connecting with his unhappy son, Jason.

Borle is a strong, angry Marvin. His often-sardonic expression accentuates Marvin's prickly character. Rannells has a charming artificiality that makes his Whizzer the perfect "pretty boy." They have tense, testosterone-laden arguments as Marvin tries to force the carefree Whizzer into traditional wifely duties.

Block is poignantly sympathetic as Marvin's exasperated ex-wife Trina, perplexed by the collapse of her family and fed up with "the happy men who rule the world." She's especially comical in her despairing tour de force rendition of "I'm Breaking Down," distractedly waving a large knife while forcefully hacking up bananas. Brandon Uranowitz is nebbishly charming as Mendel, Marvin's guilty psychiatrist.

Anthony Rosenthal is enormously appealing as Jason. His alienation worries his parents, while he's expresses concern he'll turn out gay in "My Father's A Homo." Rosenthal's small stature adds zany charm to the often-frenetic pace.

The second, darker act takes place in 1981, kicking off with "Welcome To Falsettoland" about adults needing to grow up and face the music. Tracie Thoms and Betsy Wolfe are comforting as "the lesbians next door," now part of Marvin's family, as is Whizzer.

Borle finally humanizes Marvin when he tenderly sings Whizzer a love song, "What More Can I Say." But soon, Thoms, playing Dr. Charlotte, has the unhappy task of raising the specter of AIDS in "Something Bad Is Happening." Finn brilliantly uses musical comedy to explore what constitutes a family, while humanizing the extensive tragedy of the AIDS epidemic.