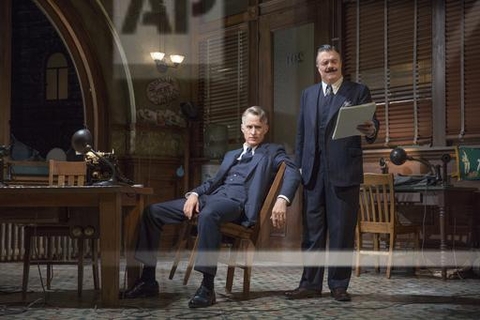 NEW YORK (AP) — You want the story? You want to really know what's up with "The Front Page" on Broadway? Well, pay attention, you lousy baboons. Here's what you need to know: This sap of a play is older than yesterday's news. But, I'll level with you. This is the God's honest truth: A fellow named Nathan Lane somehow saves it.

An all-star revival of the most jaundiced view of journalism ever to grace a stage opened Thursday at the Broadhurst Theatre with a celebrity-filled performance that critics were asked to attend, just like the old days. The play has not aged well and may have you wondering why this 88-year-old needs another spin. Then Lane shows up deep into Act 2 in the nick of time.

His Chicago newspaper executive is a thick blur of manic movement and invective, a bulldozer and bone-deep rascal. "You drooling saphead," he says to someone. Later he lashes: "You got the brains of a pancake." Lane will crack you up just saying "Shut up!" (which sounds more like "Shad ap!") His dry humor and gift for physical comedy have never been more urgently needed.

The Ben Hecht and Charles MacArthur play, which gave theatergoers and later movie audiences the image of the fast-talking, wise-cracking, cynical newspaper reporter, is itself like an old newspaper man.

It's not really quick or savvy enough to keep up with the times, but once in a while it's sort of fun to hang with at a bar, listening to its lewd, alcohol-inspired stories. Sure, ultimately it smells a little off and it's hopelessly old-fashioned, like a weird uncle who shows up on holidays.

The tale is set in the 1920s in the messy press room at the Criminal Courts Building, beautifully realized by set designer Douglas W. Schmidt. The reporters are a-Twitter — sorry, a-twitter — over the upcoming execution of a convicted cop killer and suspected anarchist, but Hildy Johnson, star reporter for the Herald Examiner, couldn't care less. He's soon off to New York with his fiancee and a high-paying job in public relations. ("Who the hell wants to work on a newspaper? A lot of crumby hoboes, full of dandruff and bum gin," Hildy says.)

His departure is delayed by the anarchist's daring jailbreak. The news sends Hildy running back to his first love. He'd rather get the story than the girl. Will the girl understand? Or will he lose everything?

John Slattery plays Hildy with part of his "Mad Men" suave showing but not enough of his charm. His Hildy is too tortured and naturalistic for a stage farce. John Goodman plays the sheriff a tad bit more in the other direction — vaudeville. Jefferson Mays and Holland Taylor get the spirit just right, but Micah Stock's German accent needs to be dialed back. Director Jack O'Brien has not worked out all the kinks in a script that often sounds like a machine gun of words.

Without Lane, there's little reason for this revival. "The Front Page" is a peek into an old, dead world and what is revealed is not very pretty. It's deeply racist, reflexively sexist, violent and anti-gay. The first act is excruciating to sit through as all-white, all-men journalists talk about blondes with "bazooms," insult each other for being "sissy" and manhandle a female janitor. This is Donald J. Trump's "locker room" onstage. (Is it any defense that it was written in 1928?)

Then Lane shows up with a glorious mustache and all is all right. You forget that up until then there was an awful lot of cross-talk and poor delivery of lines. You forget the feeling that not everyone in the massive cast was rowing in the same direction.

You are watching a master at work and that's the headline, period.