Rugby player under-fire refuses to back down over homophobic comments 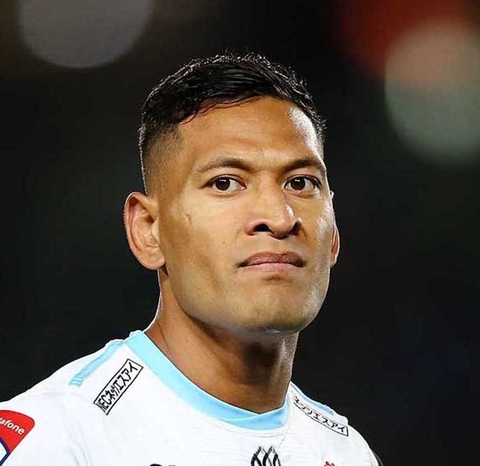 Australian rugby star Israel Folau has said he stands by homophobic posts he made on social media, speaking after a church service in Sydney on Sunday to reiterate his position.

Last week, the Wallabies fullback, who also plays for the New South Wales Waratahs, posted an image on Instagram listing "drunks, homosexuals, adulterers, liars, fornicators, thieves, atheists and idolaters," reading underneath, "Hell awaits you." The post has not been removed.

Speaking to the Sydney Morning Herald, Folau said he was unrepentant about calling gay people sinners in the post, which caused widespread condemnation.

"I'll stand on what the Bible says," he said after the service. "I share it with love. I can see the other side of the coin where people's reactions are the total opposite to how I'm sharing it."

He said the Bible "says that 'God has no pleasure in the person that's living in sin'.... He's a loving God and he wants people to turn away from what they're living in and he'll give them life."

Folau looks set to have his contract terminated by Rugby Australia, the sport's national governing body, which said in a statement last week that his comments were unacceptable and that he "did not speak for the game."

The statewide governing body for New South Wales has "stood (Folau) down ... from all player duties with the NSW Waratahs until further notice," NSW Rugby Union said Friday.

Speaking after a sermon that reportedly offered the under-fire star support, calling him persecuted for his beliefs several times, Folau said his faith outweighed his desire to keep his position on the national team or for the Waratahs.

"Absolutely," Folau said. "First and foremost, I live for God now. Whatever he wants me to do, I believe his plans for me are better than whatever I can think. If that's not to continue on playing, so be it.

"In saying that, obviously I love playing footy and if it goes down that path I'll definitely miss it. But my faith in Jesus Christ is what comes first."

He told the Sydney daily that he had not yet reached a decision on whether to sue for religious discrimination should he be cut from his teams.

"It's obviously a decision that's in the process right now but I believe in a God that's in control of all things," Folau said. "Whatever his will is, whether that's to continue playing or not, I'm more than happy to do what he wants me to do."

Folau, who broke the record for Super Rugby tries earlier this month, also tweeted a screenshot of the news that Tasmania last week became the first Australian jurisdiction to make gender optional on birth certificates.

"The devil has blinded so many people in this world, repent and turn away from your evil ways," he captioned the screenshot. That tweet is also still active.

His unchanged stance means it is unlikely that Folau will feature for the Wallabies this summer at the Rugby World Cup, particularly as sponsors have taken notice of the controversy.

Qantas, a major sponsor of the national team, condemned Folau's post. "These comments are really disappointing and clearly don't reflect the spirit of inclusion and diversity that we support," a Qantas spokesman said in a statement sent to CNN.

"We are pleased to see Rugby Australia's condemnation of the comments and will await the outcome of their review."