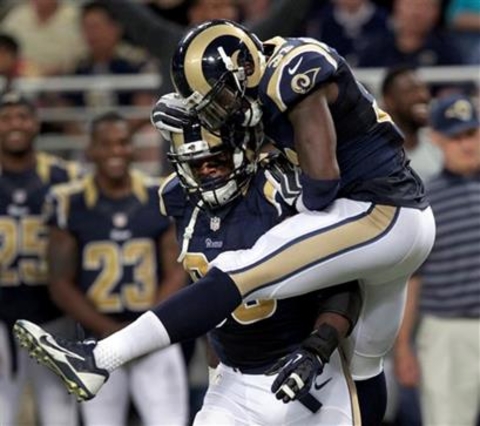 St. Louis (AP) — Michael Sam was probably never an ideal fit with the St. Louis Rams and it had absolutely nothing to do with his sexual orientation.

They're just too well-stocked at defensive end, Sam's position.

Sam showed up for his face-to-face exit meeting with coach Jeff Fisher Sunday, a few hours after clearing waivers.

He arrived via the media entrance at Rams Parka still looking right at home clad in a T-shirt, shorts and flip flops. He shook hands with two reporters and accepted well wishes but declined further comment before heading upstairs to see the coach who wasn't afraid to add the first openly gay player to the roster.

Or to cut him loose.

Fisher said numerous times during his post cutdown-day news conference Saturday that releasing the SEC co-defensive player of the year was a "football decision." Sam was outplayed in the preseason by Ethan Westbrooks, the Rams' top target when signing undrafted free agents.

The coach pointed out four other late-round picks were released, and thought it a sign the franchise is on the upswing.

There were no regrets. Fisher and Sam both said it was never a distraction, and the coach believed that would be the case if Sam landed with another team.

"There were no issues, that's the thing," Fisher said. "No issues in the team meeting room, on the field, anyplace."

"Some may be coming back," Fisher said. "You may see them Sunday on the practice squad, and some you may never ever see again."

The meeting with Sam was postponed a day so he could attend Missouri's opening victory over South Dakota State.

The Rams appeared unlikely to re-sign Sam to the 10-player practice squad because the defensive line is their strongest unit.

Sam had three sacks, one more than Westbrook. But most of the preseason, he was playing with the second- and third-stringers.

Westbrooks was the Division II defensive player of the year when he had 19 1-2 sacks for West Texas A&M, a school the Rams tapped a few years earlier for quarterback Keith Null.

"He was very productive and played all four spots," Fisher said. "He is a very, very talented young player that I think has a really good future."

Fisher noted only one defensive lineman had more preseason snaps than Sam, so he got a full shot. And that there were more than enough pass rushers with Robert Quinn and Chris Long starting plus productive backups William Hayes and Eugene Sims.

"It's the strength of our team," Fisher said, adding carrying nine defensive linemen was a "significant number."

"If you go with 10, then you're going to be short someplace else, and we're just not there."

They're not as deep in the secondary, minus cornerback Trumaine Johnson (knee) for probably the first month. They need numbers at linebacker, with just five on the roster. Backup center-guard Barrett Jones is sidelined indefinitely after back surgery.