She wrote a poem about a vagina. It landed her in jail 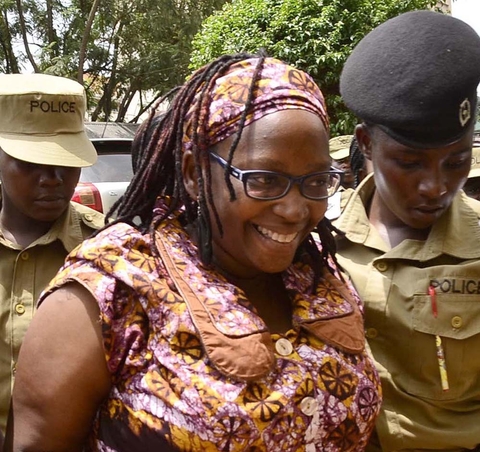 This story contains language that some readers may find offensive.

How do women get men who are standing in the way of gender equality to listen to them? Grab them by their genitalia.

"Unless you grab and squeeze hard, they're not listening," she said, wearing traditional African kitenge, red lipstick and a wry smile before a recent court hearing.

The academic, who has been in Luzira Women's Prison for eight months, is on trial after the government accused her of "cyber harassment and offensive communication" for penning and posting a poem on Facebook.

The poem, published last September, uses a graphic description of the birth of the Ugandan President and his mother's vagina to criticize his "oppression, suppression and repression" of the country, which he has ruled for over thirty years.

In early June, Nyanzi's legal team put it to Buganda Road Chief Magistrate Court that she had no case to answer and pushed for her immediate release. But the judgment went against her. She remains in jail and will start presenting her defense this week. Nyanzi has asked the court to summon 20 defense witnesses, including President Yoweri Museveni himself.

Nyanzi has been known in African academic and feminist circles for decades, but it's her provocative poetry about the 74-year-old president that has made her a household name in Uganda in recent years.

"Yoweri, they say it was your birthday yesterday. How horrifically cancerous a day!" reads part of the now infamous vagina poem.

"I wish the infectious dirty-brown discharge flooding Esiteri's [Museveni's mother's] loose pussy had drowned you to death / Drowned you as vilely as you have sank and murdered the dreams and aspirations of millions of youths who languish in the deep sea of massive unemployment, and under-emplyment (sic) in Uganda."

While the language and imagery in Nyanzi's poetry may seem shocking, she said this "rudeness" is "the only option."

"Politeness has been taken, it's been held captive, and they don't listen any more. So sometimes all you have to say is 'f*** it!'" Nyanzi said about the Ugandan government, slamming down her fist. "And then people will hear and take you seriously."

"Radical rudeness," which began as a form of anti-colonial dissent in Uganda, calls the powerful in society to account through public insult. Over the past year, two other women have been arrested for using similarly rude rhetoric to criticize the government -- one for allegedly threatening to hit the President with her genitals. The women, who were protesting the arrest of the musician-turned-politician who goes by his stage name of Bobi Wine, both retracted their comments. Ugandan women have also used nudity as a form of protest in recent years.

In 2015, a group of older women in rural northern Uganda stripped in front of police and government representatives to demonstrate against attempts to remove them from their ancestral land.

"Older women are no longer in need of the acceptance of society, so they will swear and walk away, and men will listen," Nyanzi told CNN. "I don't get inspired by high and mighty women, it's everyday women. It's grandmothers, stepmothers, second wives, all swearing at their men".

But "radical rudeness" can be dangerous in an environment where civil liberties are increasingly being called into question. As well as Nyanzi's arrest in November 2018, last year the Ugandan government amended the constitution to remove the presidential age limit, imposed a "social media tax" that critics say is an attempt to hinder freedom of speech online, and was implicated in the alleged torture of Bobi Wine.

In a statement last September, a government spokesperson described Bobi Wine's claims of torture as a "tantalizing, although unproven" diversionary tactic, and urged the musician to present them in court so they could be "investigated and (the) culprits punished."

In the 2019 Reporters Without Borders index, Uganda dropped eight places, from 117 to 125. The report said "intimidation and violence against reporters are an almost daily occurrence" in Uganda.

The Ugandan government didn't respond to CNN's request for comment for this story.

In this challenging climate, it came as a surprise to many when Nyanzi turned down the option of posting bail.

"Bail to go and do what? Bail to go where? To go back and still live in fear every time I write a Facebook post?" she asked.

Nyanzi is battling three other legal cases: another "cyber harassment and offensive communication" trial for a poem calling the President a "pair of buttocks," which she took bail for; a civil dispute with her former employer Makerere University, who dismissed her for staging a naked protest; and a case disputing her inclusion on Uganda's "no-fly" list initiated by her critical Facebook commentary.

Nyanzi says she wanted to push the government to hear her case on the vagina poem, and to rationalize exactly why they have put her in jail.

"We managed to force the state to bring witnesses," she said.

When detective Bill Dickson Ndyamuhaki -- a witness for the government -- came to give evidence about her vagina poem in court, people in the courtroom could not contain giggles as he was asked by the judge to read out Nyanzi's explicit work in full.

"When you run a government that corrupt, how do you still connect to the society?" said Rosebell Kagumire, editor of digital platform African Feminism. "'Morality laws' are a good tool for this government to continue distracting society on what needs to be done. They tap into long-held notions about controlling women's sexuality, and there the President and his government will find allies in all communities."

"There are cultures of suppressing women's expression, especially when it comes to who is accepted to be vulgarist," Kagumire added. "Stella is very much vocal on queer rights, girls' rights and uses the freedom of expression that is usually reserved for men -- the freedom to insult."

At Luzira Women's Prison, prisoners wearing yellow dresses tended to an already well-manicured garden. Nyanzi sat on a mat on the floor of a room with other prisoners, as visitors -- who sat in chairs -- were brought in to visit their loved ones. "I'm used to life here now," she said happily, talking about life inside.

Nyanzi was first imprisoned in 2017 for a month after posting a Facebook poem criticizing Uganda's first lady, Janet Museveni, for failing to deliver on her promise to provide sanitary pads to schoolgirls. Museveni, who is Minister for Education and Sports, said there ultimately wasn't enough money in the budget for the initiative. During this stint in prison, the government attempted to carry out a psychiatric assessment of Nyanzi because the prosecutor alleged she was insane.

But Nyanzi was released on bail, and went on to successfully crowdfund for the distribution of sanitary products through the Pads4girlsUg Project.

"I got involved [in activism] because it was part of what I was studying anyway," said Nyanzi, an anthropologist who has studied a wide range of marginalized communities in Uganda and other African countries, including sex workers, women with HIV, and LGBTQ people.

"Suddenly those I was studying, writing about, recording, could die" she said, referring to a law passed in 2014 which mandated life in prison for some homosexual acts. A previous version of the bill initially included the death penalty. The law faced strong resistance from local activists and members of the international community, and was eventually annulled by Uganda's constitutional court later the same year.

As Nyanzi began attending the court cases of people she was studying, and visiting them in jail, the line between academia and activism began to blur.

"It became impossible to just stay as an academic that is not involved," Nyanzi said. "People were getting thrown out of their offices and homes ... I started hiding people in my house."

Keem Love Black is one of the people Nyanzi says she visited in prison during that time.

Now the tables have turned. Last month, Black was sitting on the hard bench designated for visitors to the prison, waiting to see Nyanzi, who has become a close friend.

"Everyday I respect and love Stella," said Black, whose shy demeanor and soft voice jarred with her fearless social media presence as one of Uganda's most prominent transgender activists.

"Her research is really important to me because I can use it to sensitize people about transgender people and sex workers ... people discriminate against us so much," she said, adding that Nyanzi is the "strongest feminist" she had ever come across.

Nyanzi says it's people like Black who give her hope for Uganda's future.

"Sex workers are very good at alternative modes of organizing and mobilizing," Nyanzi said, but many feminists "think we are better than them and exclude them.''

While divisions remain, Nyanzi says she believes different struggles in Uganda are slowly starting to come together. The academic wants to see everyone uniting against the government, from Pentecostal Christians to sex workers, Bobi Wine supporters to the LGBTQ community.

"You know when a match is refusing to light?" she said, acting out a striking motion with her hands. "I think it's just one more strike of the matchbox. We're getting there. I don't know what it will take, but we just have to keep striking."

Editor's note: The Gayly is a CNN affiliate. We are committed to covering gender inequality wherever it occurs in the world.