Shut up and focus: The impacts of AD/HD 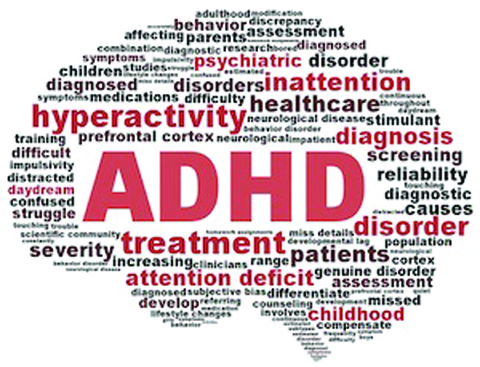 Much of the rhetoric surrounding Attention Deficit/Hyperactivity Disorder (AD/HD) still hinges on the idea of the random, butterfly chasing child, who almost always is disregarded as just a way of explaining infantile behavior and not a real disorder in the slightest.

But in reality, AD/HD is documented and defined by its symptoms, many deriving from impairment of executive functioning and a lack of dopamine in the brain.

“The best way to describe it is like trying to move through a thick fog,” Says Victoria Clary, a graduating art BFA and aspiring LGBTQ children’s books writer and illustrator. Clary has been diagnosed with inattentive AD/HD since before starting second grade. She currently lives un-medicated due to medications’ cost and the long difficult process for even those who have the disorder to receive access to it.

“I think it would be easier, in some ways, to be like, ‘here’s the way it hasn’t impacted my life’,” Clary reveals. “It really affects all of my work flows, all of my processes: in my everyday life, in work, in school; in the way that I have to schedule my time, or notremember to schedule my time. I’ve had to definitely learn ways to work around it or work with it.”

AD/HD comes in three forms: hyperactive, inattentive and combined. It also has three severity levels: mild, moderate and severe. These can change throughout a person’s lifetime. It is also defined by the American Psychiatric Association’s DSM-V – a diagnostic manual - as being a “debilitating” disorder that affects every aspect of a person’s life, even into adulthood.

But while these serious symptoms must begin in early childhood, there are many, especially girls, who do not end up diagnosed until late teens and even adulthood.

“My brother got diagnosed when he was younger and I started to wonder if I had it,” said Jessica Rae Knowles, who was diagnosed at 17. “It was harder to pay attention in school and it always took me longer to learn things.

“I got on medication and I didn’t like it,” admits Knowles, explaining it made her anxious. “But the first day I took it we had an assignment and usually I’d just stare around the room; just think, be in my ‘la la land’, but I realized I was doing [the assignment] really fast and at a good pace. I realized, ‘Okay, this medication is working.’

“But then I got off Soonercare at 19 and I couldn’t afford the medication anymore,” she remembers. “So [my doctor] put me on Strattera and I didn’t think the results were as good so I just kind of stopped taking it.”

Problems with medication are common for those with AD/HD, just as social, organizational and emotional problems also arise. ADDitude magazine and CHADD, the national resource on AD/HD, both mention unhealthy relationships with food (i.e. eating disorders), compulsive talking and other behaviors, depression and anxiety to be just a fraction of the negative effects of AD/HD and society’s view of it on those who must deal with it every moment of their lives.

“I have to make lists because I can’t keep everything in order in my head,” says Knowles. “In big groups, I get lost and I stop caring really until I hear one thing interesting, selectively, and I’ll ask what we’re talking about and they’ll say, ‘We just said that’.”

Along with impaired executive functions, Psychology Today and other sources also link AD/HD to a crippling lack of self-esteem.

“It’s called rejection sensitive dysphoria,” says Clary. “We’re socialized as we grow up, ‘You need to focus more,’ ‘You can do better,’ ‘This wasn’t good enough,’ ‘Why didn’t you get an A?’ ‘You’re smarter than this,’ and at a point it becomes devastating.

“It moves past disheartening into devastation and becomes something that you cannot get rid of and so all of your work is held against this, ‘I could have done better.’ So, when people later in life give you criticism, no matter how well meaning they are, they say, ‘This is good, but it could be better’ - instant devastation.”

AD/HD is much more impactful than we as a society like to believe and, until we understand that fact, people with AD/HD will continue to be at a higher risk of suicide (which, in young children, is more often linked to AD/HD than depression), eating disorders, feelings of isolation, depression and addiction.

“AD/HD is like an elephant in the middle of a room,” Clary says firmly. “You always have to work and live your life around it.”
_