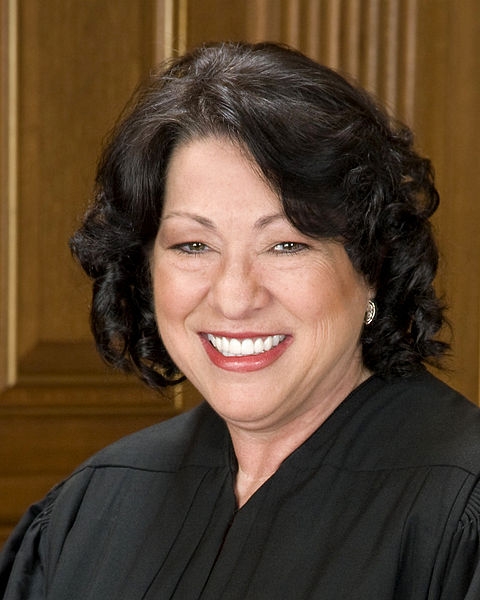 US Supreme Court Justice Sonia Sotomayor is the first Hispanic justice on the Court. Official photo.

And on Sunday, the first Hispanic justice on the nation's highest court explained why, saying "you can't come from the world I grew up in, the South Bronx, without feeling the frenzy of exile, constantly."

She spoke at Cooper Union, a private college in Manhattan's East Village where Abraham Lincoln once gave a speech against slavery.

The justice said she wasn't "doing press" on an evening in her hometown that ended with hugs from some members of the audience who asked her to sign their copies of her memoir, "My Beloved World." The best-selling book was published earlier this year with what she called Sunday "some baring of my own heart."

She spoke on the closing night of the PEN World Voices Festival of International Literature in New York City, which included her conversation with scholar Henry Louis Gates Jr.

It was hardly a private event.

With a wry smile, Sotomayor said she recognized that "it seems pointless today to exclude the press from any event, when any member of the audience can tweet quotations."

This year's festival has focused on looking at the idea of bravery in art and politics.

Sotomayor was careful not to reveal her personal opinions, though she conceded that "it is impossible for a homosexual couple today not to be affected by the DOMA and Proposition 8 cases in some way," adding to laughter, "just so you're all clear, I'm not predicting anything."

The federal Defense of Marriage Act, or DOMA, defines marriage as the union between one man and one woman — now being considered by the Supreme Court. The court must also rule on California's Proposition 8, a ban on same-sex marriage.

The justice told the New York audience on Sunday that 2013 is likely to be "a turning point for those whose lives will be changed, for better or for worse, by those rulings."

Born in New York to Puerto Rican parents, Sotomayor was nominated for the Supreme Court in 2009 by President Barack Obama and sworn in later that year.

She said she needs to keep returning to the Bronx, "to the essence of my world, with love, to take strength from."

Sotomayor said that while the streets of her childhood South Bronx were portrayed as "ugly, dirty, crime- and drug-ridden" in movies, she wrote about "the hopes and struggles of the people," about "a beloved world for someone like me."