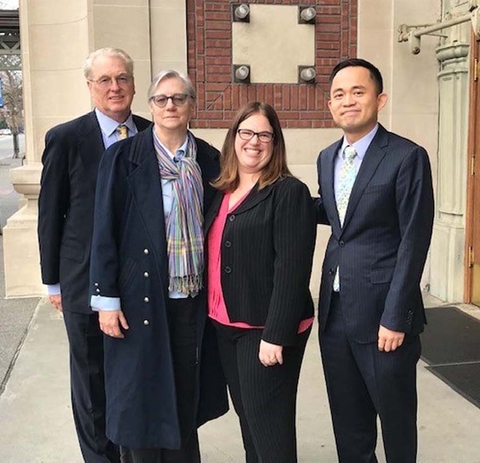 Her partner died before same-sex couples were able to marry.

Lambda Legal today asked a federal court to end the U.S. Social Security Administration’s (SSA) categorical refusal to provide spousal survivor’s benefits to a 64-year-old lesbian who's partner of 27 years died before same-sex couples in the State of Washington were able to marry.

Lambda Legal also asked the court to end this discrimination against all similarly situated same-sex surviving partners who were barred from marriage, arguing that SSA’s exclusion of same-sex couples from survivor’s benefits for which they paid based on their inability to marry is unconstitutional.

“By requiring same-sex couples to have been married at a time when that was impossible for them under state law in order to access survivor’s benefits, the Social Security Administration is now doubling down on unlawful discrimination that continues to harm surviving same-sex seniors every single month they are deprived of the benefits for which they paid,” said Lambda Legal Counsel Peter Renn.

“Helen and Marge were together for 27 years. They built a home, raised a child, and paid into Social Security like any committed couple. But because they couldn’t marry, Social Security is denying Helen the essential survivor’s benefits that she and Marge paid for."

Renn said heterosexual surviving spouses are able to count on the critical financial protection of survivor’s benefits after the death of their loved ones, but SSA casts surviving same-sex partners like Helen aside, even though they paid the same lifetime of contributions from their paychecks.

“Margie and I were fortunate to share 27 years of love and commitment together on this earth,” said Helen Thornton, the lead plaintiff in the Lambda Legal lawsuit. “Like other committed couples, we built a life together, formed a family, and cared for each other in sickness and in health. Although we wanted to express our love for each other through marriage, discriminatory laws barred us from doing so before Margie’s death.

"Now, in my retirement years, I’m barred from receiving the same benefits – essential to my financial security – as other widows, even though Margie and I both worked hard and paid into the social security system with every paycheck.”

Helen Thornton and Marge Brown were in a committed relationship with one another from 1979, when they were both 23 years old, until 2006, when Ms. Brown died of cancer at age 50. Thornton was Brown’s caregiver during her three-year battle with cancer. Brown was also survived by a son, whom she and Thornton raised from birth. Social Security generally requires that couples be married for at least nine months before a spouse dies in order for the surviving spouse to qualify for survivor’s benefits, but for many same-sex couples, that was impossible.

“We have long heard from surviving partners who, like Helen, were in decades-long relationships and built lives together, but were barred from marriage. And now, they are confronting old age or disability without the critical protections that Social Security provides,” said Karen Loewy, Senior Counsel and Seniors Strategist, Lambda Legal. “That is why we also represent the National Committee to Preserve Social Security and Medicare in this case, whose mission is about protecting and ensuring the financial security of maturing Americans and whose members include surviving same-sex partners who continue to face this discrimination.

"The only true remedy for the constitutional violations created by SSA’s exclusion is to end that exclusion for all surviving same-sex partners barred from meeting the requirements for benefits by unconstitutional marriage bans.”

“If you contribute to Social Security throughout your working life, you and your family will receive your earned benefits upon retirement, death, or disability,” said Max Richtman, President and CEO of the National Committee. “Same-sex partners should not be denied Social Security survivor’s benefits when discriminatory laws prevented them from getting married in the first place. Basic fairness demands that they receive the same benefits as married couples.  It’s long past time to right this wrong.”

Thornton, 64, is semi-retired and takes care of animals to supplement her monthly social security income. She is also a member of the National Committee. She applied for survivor’s benefits in 2015, shortly before she would have otherwise been eligible to begin receiving survivor’s benefits at age 60 based on Brown’s work record. SSA denied her application based on the fact that she and Brown were not married at the time of Brown’s death in 2006, even though that was impossible in the State of Washington, which did not permit same-sex couples to marry until 2012.

Lambda Legal’s attorneys working on the case are: Peter Renn, Tara Borelli, and Karen Loewy. They are joined by Robert Thornton and Linda Larson with Nossaman LLP.

Lambda Legal is a national organization committed to achieving full recognition of the civil rights of lesbians, gay men, bisexuals, transgender people and everyone living with HIV through impact litigation, education and public policy work.