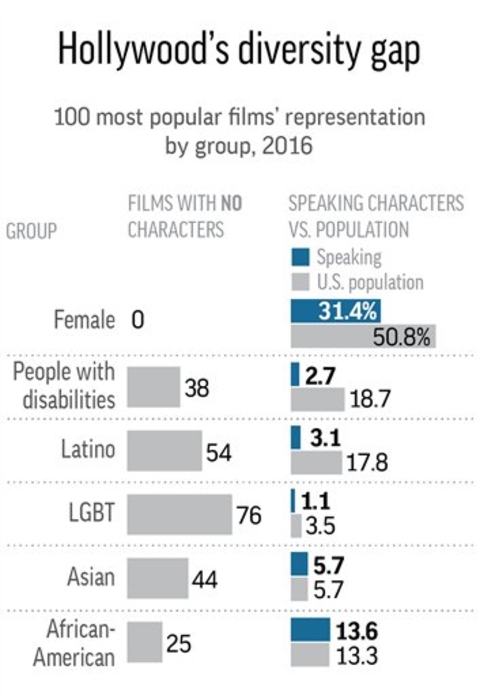 Graphic shows demographic characteristics of 100 most popular films of 2016. Via AP.

LOS ANGELES (AP) — In 2016 "Moonlight" won best picture and "Hidden Figures" was the 14th highest grossing film of the year, but popular Hollywood films remained as white and male-dominated as ever.

A new report from the Media, Diversity, & Social Change Initiative at the University of Southern California's Annenberg School for Communication and Journalism, provided first to The Associated Press, finds that the representation of women, minorities, LGBT people, disabled characters in films remains largely unchanged from the previous year, despite the heightened and attention to diversity in Hollywood. At the bottom of the rung and most egregiously disproportionate to their U.S. demographics are women, Hispanics and disabled characters. Exclusion, the report says, is the norm in Hollywood, not the exception.

For nine years since 2007, USC has analyzed the demographic makeup of every speaking or named character from each year's 100 highest-grossing films at the domestic box office (with the exception of 2011), as well as behind-the-camera employment for those films including directors, producers and composers.

"Every year we're hopeful that we will actually see change," Stacy L. Smith, a USC professor and the study's lead author, told The Associated Press. "Unfortunately that hope has not quite been realized."

Women remain vastly underrepresented when it comes to both speaking roles and lead or co-leading parts in films. Of the 4,583 speaking characters analyzed from the top 100 films of 2016, 31.4 percent were female, a number that is basically unchanged since 2007. Also, only 34 of the films depicted a female lead or co-lead — and only three of those were from underrepresented groups.

"We see a real stalling out," Smith said.

In terms of race and ethnicity, the landscape remains largely white, with Hispanics grossly underrepresented compared to the breakdown of the U.S. population. Of the speaking characters surveyed: 70.8 percent were white; 13.6 percent black; 5.7 percent Asian; 3.1 percent Hispanic; and less than 1 percent American Indian, Alaska Native or Native Hawaiian.

According to the latest U.S. Census, the nation is 61.3 percent white, 17.8 percent Hispanic, 5.7 percent Asian, 13.3 percent black, 1.3 percent American Indian and Alaska Native and 0.2 percent Native Hawaiian.
More striking still is the film by film "invisibility" breakdown, which finds that 25 of the 100 films did not feature a single black character in a speaking role; 54 films had no Hispanic characters (14 higher than in 2015); 44 had no Asian characters (a rare improvement from 2015 which tallied 49 films with zero Asians).

For women of color, it's a bleaker story.

"We can't just talk about females in film anymore. What our data shows most powerfully this year over any other year is the real epidemic of intersectional invisibility in film," Smith said. "If you cross gender with race and ethnicity, you see that the bottom really drops out for females of color on screen."

The data speaks volumes: 47 films featured no black females; 66 had no Asian females; and 72 had no Hispanic females.

Also largely invisible are LGBT females, who were excluded from 91 of the top 100 films of 2016. There was a notable increase in films with gay speaking characters in 2016 — 36 up from 19, but zero transgender characters. Most of those — 79.1 percent — were white and 76 of the 100 films had no LGBT characters. Only one, "Mooonlight," featured a gay protagonist.

Every year there are indicators of change, however, including this year with the successes of "Wonder Woman," ''Get Out" and "Girls Trip" among others, and more on the horizon. The Academy of Motion Picture Arts and Sciences has also recently made strides to diversify its membership.

"The question is with all of these high-profile examples, will the memo to Hollywood be read seriously and will they actually start engaging in more inclusionary hiring practices," Smith said.

USC has a number of recommendations for changes — including adding five female speaking parts to each top film (which would result in gender equity in just three years) and encouraging A-listers to implement equity clauses into their contracts. The organization is also available to studios and content creators looking for advice, understanding or even lists of working female directors to consider.

"Diversity is not just something that just happens," said Katherine Pieper, a research scientist on the report. "It's something you have to think about and aim for as an objective and achieve."