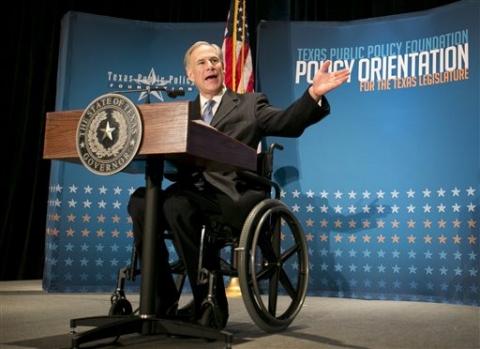 Abbott called on Texas Friday to take the lead in pushing for constitutional amendments that would give states power to ignore federal laws and override decisions by the U.S. Supreme Court. (Jay Janner/Austin American-Statesman via AP)

Conservative calls for states to get together and ratify new amendments to the Constitution are hardly new. Republican presidential candidate Marco Rubio has even vowed to push for a convention if elected, though the idea is generating little buzz in the 2016 presidential race.

Abbott is now hoping his weight as governor of the nation's biggest conservative state can revive momentum in an enduring but perennially unattainable dream of some Republicans. His vision also goes beyond the most common GOP desire for a convention — to tack a federal balanced budget amendment onto the Constitution — and outlines a flurry of new state protections that would nullify federal laws and weaken the U.S. Supreme Court.

One of his nine proposals would require a supermajority of seven justices — out of nine — to invalidate any state law.

"The Supreme Court is a co-conspirator in abandoning the Constitution," said Abbott, the state's former attorney general and a former Texas Supreme Court justice. "Instead of applying laws as written, it embarrassingly strains to rewrite laws like Obamacare."

Texas in recent years has been a recurring defendant in major cases before the Supreme Court. In March, the court will hear oral arguments over the state's sweeping abortion restrictions that would leave Texas with fewer than 10 abortion providers, down from more than 40 in 2012.

Abbott unveiled his plan to a friendly audience of conservative policymakers in Austin, but outside, others called the prospect of a convention far-fetched.

"There is no remote possibility that is going to take place," said Lino Graglia, a conservative professor of constitutional law at the University of Texas at Austin. "Just to get any constitutional amendment is virtually impossible."

For states to call an assembly, it would require approval from 34 legislatures. Over the past four decades, 27 states have endorsed the idea at one time or another, including Texas at a time when the state was controlled by Democrats. Convention proposals were also introduced or discussed in about three dozen legislatures last year.

Shortly after Abbott took office last year, the Texas Legislature failed to endorse a more narrowly focused convention on conservative ideals. Some Republicans blamed the defeat on fears of a "runaway" convention that would take on myriad issues. Abbott said he wants Texas lawmakers to give their support next time around in 2017.

The United States has not held a constitutional convention since George Washington himself led the original proceedings in Philadelphia in 1787.