Thou shall not force your beliefs on others 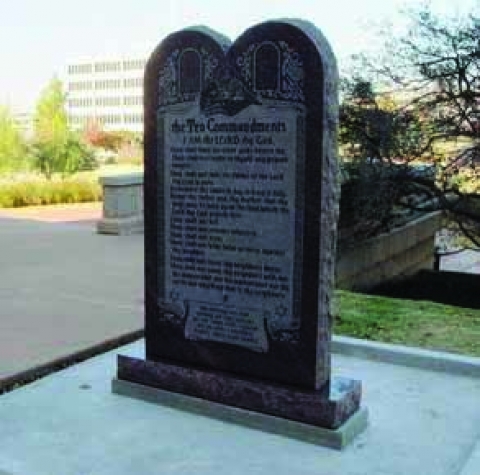 Oklahoma Supreme Court: "Thou shall remove this monument from the grounds of the Oklahoma State Capitol." File photo.

(AP via the Enid news and Eagle) It has been an eventful couple of weeks for the Supremes. Not Diana Ross’ old singing group, but the justices who make up the Supreme Court of the United States.

First the justices upheld a key tenet of the Affordable Care Act, then made gay marriage the law of the land. Then they said it is OK to kill a condemned prisoner using a drug that has caused problems in a number of executions. Then they rested, not to return until the fall.

Leave it to the Oklahoma Supreme Court to step into the void.

On Tuesday, the state Supreme Court ruled the Ten Commandments monument on the grounds of the state Capitol must come down.

The outcry was immediate. One angry Facebook poster called the move “Christian persecution,” apparently forgetting the fact that it was Moses, a Jew, who brought the Ten Commandments down from Mount Sinai on stone tablets, thousands of years before Christ’s birth.

So the monument, paid for by private funds, must come down after the court ruled it indirectly benefits people of the Jewish and Christian faiths in violation of the state constitution.

A decade ago the Supremes, the U.S. version, waffled on deciding two cases involving the Ten Commandments.

The court voted against Ten Commandment displays on the grounds of two courthouses in Kentucky, while allowing one at the Texas state Capitol.

In that instance, the court ruled that the Kentucky displays violated the First Amendment because they constituted an effort by the government “substantially to promote religion.”

The Texas display, the justices ruled, served a “mixed but primarily non-religious display.” In the Texas case, the Ten Commandments monument was among some 40 monuments and historical markers spread over the Capitol’s 22 acres.

The Oklahoma Capitol already is home to the Oklahoma Veterans Memorial, as well as some working oil wells. But now the Ten Commandments will have to go.

This after a man drove his car through the monument in 2014, destroying it. He said the devil told him to do it. The monument was subsequently replaced in January of this year.

But now that the Ten Commandments monument has been ruled unconstitutional, the devil will not get his due, or his monument, either.

In response to the state Capitol’s Ten Commandments monument, the New York-based Satanist Temple proposed a Satanic monument that would stand side by side with the Ten Commandments. The proposed statue would have depicted the devil as Baphomet, a figure with a goat for a head, wings and a long beard, flanked by a pair of smiling children, a boy and a girl.

But now that the Ten Commandments monument will have to be removed, the devil’s statue will not be erected. Neither will the statues proposed for Oklahoma state Capitol grounds by a Hindu leader in Nevada, an animal rights group and the tongue-in-cheek Church of the Flying Spaghetti Monster.

What is good for one is good for all, which was the point of the court's order to remove the Ten Commandments from the state Capitol grounds. It's not a ruling against Judaism or Christianity, per se, but against favoring one or two religions over others, or over no religion at all.

It has been said America is a Christian nation, and indeed it is. But America also is a Jewish nation, as well as a Muslim, Buddhist and Hindu nation, along with a smattering of other faiths, as well as those who profess no faith whatsoever.

Religious freedom, or the freedom to profess no religion at all, is one of the reasons this country was founded. As much as we’d like for everyone to believe exactly as we do, and no matter how wrong we think those who don’t are, we cannot impose our beliefs on someone else. If we could, this would not be America, it would be Russia, or North Korea.

Supporters of the Ten Commandments monument can now place it in front of a church, or on private property somewhere, that is their right. And supporters of the Satanic statue can put it anywhere they like, too. I have an idea. It rhymes with “Where the sun don’t shine.”