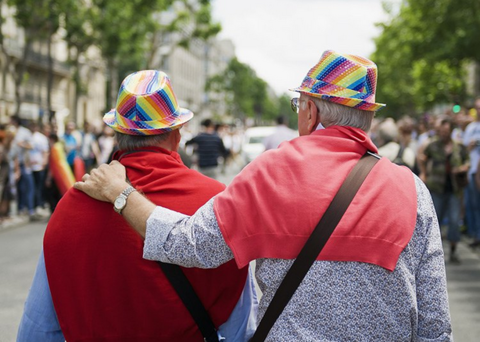 AUSTIN, TX (AP) SeniorAdvice.com, one of the nation's top senior housing referral services, released a list of America's top cities for gay-friendly retirement today. This is the second annual list of best cities for LGBT seniors by SeniorAdvice.com and compared to the previous list, there were many additions as well as multiple repeats.

For the 2018 list a variety of factors were considered, including the following: percentage of LGBT population in the area, available social activities, festivals, weather, LGBT Chamber of Commerce presence, presence of gay-friendly senior communities, quality of healthcare, number of hospitals and pharmacies, local and state legislations protecting the LGBT community, cost of living, and the city's SeniorScore™.

Multiple cities in California and Florida made the list, including Ft. Lauderdale, mainly for its high senior population, and Palm Springs, for its high number of same-sex households.  The country's Northwestern region had several cities make the list.  Seattle, Washington boasts a large number of senior living facilities, and Portland, Oregon has a high LGBT population.  The Eastern part of the United States had a strong presence on the list as well.  Beautiful scenery is one reason why Providence, Rhode Island made the list, and Boston, Massachusetts has an abundance of great hospitals, home health and Medicare providers.

Previously, the list of top cities for LGBT seniors predominately focused on larger U.S. cities.  However, this year there was no limit on the size range of cities included.  The 2018 list highlights both medium-sized and large cities in the United States.  SeniorAdvice.com defined medium-sized cities as those ranging in population size of 50,000-500,000 residents, and large cities as having over 500,000 residents.  Also, this year, 20 of the most LGBT friendly cities for seniors were identified.  Whereas in the past, the list highlighted only 15 cities.  A total of 9 cities were repeats from last year's list and 11 cities were new additions. 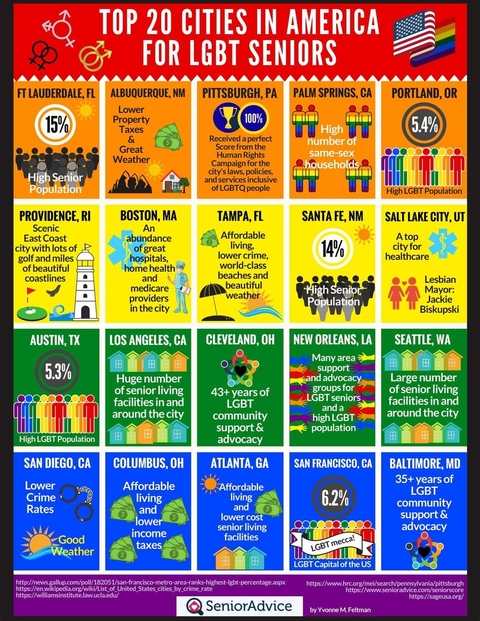 The following U.S. cities have been named by SeniorAdvice.com as the most accommodating for LGBT seniors in 2018:

According to the national nonprofit Services and Advocacy for Gay, Lesbian, Bisexual & Transgender Elders (SAGE), today there are 3 million LGBT people age 55+ living in the United States. With that number increasing each year, the need to discover locations that are welcoming to LGBT elders also increases.  SeniorAdvice.com recognizes that the lesbian, gay, bisexual or transgender (LGBT) older adult community is currently a very important part of the American population to consider, and has dedicated much time and energy to supporting this group.