Transgender people find a home on YouTube but challenges remain 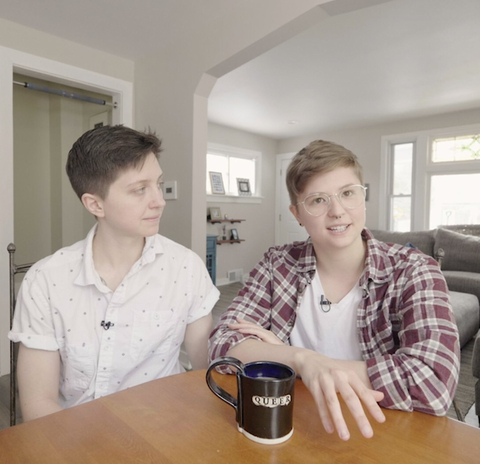 For a trans person, YouTube can be an extremely valuable resource. It's a place where they can find — and share — personal stories of gender transitions, identity struggles and journeys through surgeries and hormone treatments.

The Google-owned video platform has ignited a community of social media stars, known as creators, making videos about virtually everything, from gadget reviews and beauty tutorials to topics relevant to LGBTQ people.

Trans creator Reed Wetmore said YouTube has been a "lifeline" for the trans community.

"Making my videos and watching other creators on YouTube gave me strength. Seeing other trans men on YouTube being so much farther in their journeys gave me a lot of hope," he told CNN Business. "When some family and friends didn't react the way I hoped they would [to me coming out], I went back to YouTube and found some solace and comfort there in the community."

Nikita Dragun said her YouTube channel went viral in 2015 after she posted a video coming out as trans. Dragun continued to document her trans journey, including surgeries, as well as sharing beauty tutorials. She now has over 2 million subscribers and recently launched her own makeup line, Dragun Beauty.

"If I could've seen someone like me years ago, I would've wanted to know who I could've become," she told CNN Business. "I think I owe it to myself and other people to educate them."

But some trans creators also have frustrations with the platform's policies on restricting content. In recent interviews with CNN Business, more than half a dozen trans creators shared their experiences with YouTube and many expressed concern that some of their trans-related content, such as sexual education videos, has been limited from making money from ads or was age restricted. Many said they're frustrated with YouTube's lack of transparency around why their videos are being demonetized.

Creators can apply to make money from ads that run on their videos through the YouTube Partner Program. Under YouTube's "advertiser-friendly" guidelines, the company says content that "features sex toys, sexual devices, or explicit conversation about sex may also not be suitable for advertising, with limited exceptions for non-graphic sexual education videos." The policy does not elaborate on what "non-graphic" sex ed means.

"We're proud of the incredible LGBTQ+ voices on our platform and take concerns like these very seriously," a YouTube spokesperson told CNN Business. "All content that shows ads on YouTube is subject to our Advertiser-Friendly Content Guidelines, and discussion of sexual education, while welcome on the platform, may not always be suitable for ads. That's why we offer creators on YouTube a variety of ways to monetize their content outside of advertising, including memberships, Super Chat and merchandise."

Ads are typically the most common way creators make money on YouTube. Creators with smaller followings may not be eligible to tap into some of YouTube's other income opportunities. For example, a creator must have more than 30,000 subscribers to have channel memberships, while the requirement is over 1,000 subscribers for making money from ads.

YouTube's policies sometimes contain exceptions and gray areas — often with limited information around how those guidelines are enforced. For a long-marginalized group like the trans community, it can be especially frustrating not to specifically know why some of their content is being restricted.

The YouTube spokesperson also said the company is working on ways to improve communications with creators so that there is more clarity on how its content reviewers evaluate their videos.

Ash Hardell, a trans creator who posts videos focusing on queer and trans issues, said young people are in a "vulnerable" position when they're not out.

"They need a safe, private place to learn this information," said Hardell. That's where YouTube comes in.

Hardell is also concerned about YouTube age-restricting sex ed videos. Videos can be age-restricted because of things like vulgar language, violence, nudity and sexually suggestive content. When videos are age-restricted, they can't be monetized or seen by people under age 18.

Hardell, whose preferred pronouns are they/their, works with their wife Grace on the channel. They said YouTube is an important source of income for the pair. When their videos are demonetized and age-restricted, they said that can impact their earnings and how many views they get. When a video is age-restricted, it isn't shown in certain sections of YouTube, and can be harder to find.

"For YouTube to age restrict a video, it cuts [young people] off from important education," Hardell said.

In one instance, YouTube deemed Hardell's video focused on a practice called packing — padding pants or underwear to make it look like the person has a penis — "not suitable" for most advertisers. Some trans men and non-binary people use packing to feel more comfortable or confident with their identity. Hardell also shows images of commercial packers, and discusses sexual topics and terms.

YouTube declined to comment about why specific videos were only showing limited ads. But the YouTube spokesperson said if sexual education videos include realistic depictions of genitalia, they are typically considered graphic and will likely only show limited ads.

The company isn't always transparent about why a video is demonetized, which can leave creators left guessing. For example, some creators told CNN Business that YouTube told them they violated the company's "Community Guidelines," but wouldn't specify which one.

Darnell Motley, lead researcher for LGBTQ health at the University of Chicago's Ci3 initiative, is concerned that demonetization could discourage trans creators from continuing their work on the platform. It takes time to create content — whether it's for YouTube, Instagram or other platforms — and creators often want to monetize those efforts and make social media their main career.

Motley also said there is already a lack of comprehensive sexual education for trans people, especially in traditional school settings.

"There are so few avenues [for trans people] to learn about sex," he said. "So YouTube really becomes a key space for folks to access information that is community vetted but also that is non-stigmatizing and comes out of experience versus conjecture or some sort of judgment."

Motley said what "non-graphic" sex education means should be better defined. He thinks YouTube should partner with health educators to discuss this and how the platform can balance the need for that content.

"In order to do sex ed, you have to talk about sex. It's critical to the work," he said. "Trans youth are trying to learn about sexual health and transitions. It can't be vague. It has to delve into some of the details."

Zil Goldstein, associate medical director for trans and gender non-binary care at Callen-Lorde Community Health Center, said there are higher rates of HIV and sexually-transmitted infections in trans people due to the lack of available sex ed resources.

"YouTube lets people get more detailed information and find out more about how to transition, and ways to live a healthy life," she said. "People can find someone who's like them [on YouTube] and feel less alone."

Goldstein said trans creators could consider potentially working with illustrators to create non-graphic images for sex ed videos or link to web pages that have pictures of packers or other sexual prosthetics people may need.

Ty Turner, a trans creator, said YouTube was where he learned "what being trans was in the first place."

"[YouTube] taught me almost everything I knew about the changes of testosterone, different people's transitions and what I could expect socially and physically," he said. "It was a major source of education and learning for me."

Turner then began posting his own YouTube videos about his transition and experience.

However, some of his videos have been limited from making money from ads in recent years. For example, his video review of an STP product — short for "stand to pee" — was deemed not suitable for most advertising by YouTube. An STP device allows trans men to use urinals and can help relieve some of their anxiety around using the restroom.

In order to boost his earnings, he's started working with brands directly on sponsored YouTube videos.

"I get that YouTube is a business, and their priority is to make money and make their advertisers money, but their creators are the people who are the ones putting in the work, and I think some transparency and some solid feedback would be phenomenal," Turner said. "I would love to have some clarity on what the issue is."

Aaron Ansuini, a trans creator who discusses disability, mental health and art on his YouTube channel, said posting on the platform has helped his self-esteem and confidence.

"I'm on the autism spectrum. It's helped me break through a couple of those barriers and work through difficulty communicating with others," Ansuini said.

"Building a community online is a huge game changer for people who are queer or disabled," he added. "If you live in a small town or in a not very accepting town, you still have access to your community and your people."

But Ansuini has also had his videos deemed not suitable for most advertisers when he's discussed trans-related topics, including a video from April about what relationships and intimacy are like for someone who is disabled, asexual and trans.

After CNN Business inquired about the video, it became fully able to monetize again.

Last year, Ansuini's channel received a "strike" for his video showing how to inject testosterone. (If a creator gets three strikes within 90 days, their channel will be permanently deleted from YouTube). The strike was later removed by YouTube.

"My priority isn't making money off my videos, but it's more about the principle," Ansuini said. "It sends a lot of messages, like 'you're not advertiser-friendly', or 'being queer is something that is explicit or something that only adults can be.'"

According to YouTube, its automated ads systems run several scans to decide if a video meets its guidelines for advertising. A YouTube spokesperson said creators can go through an appeals process when they disagree with the company's decision. YouTube also says its systems sometimes get it wrong when deciding which videos can show ads.

This isn't the first time tensions between YouTube and the LGBTQ community have surfaced around content decisions.

At the time, YouTube said the aim of Restricted Mode was to "filter out mature content for the tiny subset of users who want a more limited experience. LGBTQ+ videos are available in Restricted Mode, but videos that discuss more sensitive issues may not be." YouTube also admitted some of the videos created by the LGBTQ community were mistakenly filtered out.

Last year, some LGBTQ YouTubers began speaking out about their videos being age-restricted and demonetized. A few of them said that in some cases, anti-LGBTQ ads ran on some of their videos, although creators told CNN Business the ad issue appears to be resolved now.

Trans YouTuber Kat Blaque — who primarily discusses social justice issues and being a black woman in her videos — believes creators on the platform, in general, need to better understand how monetization on YouTube works and the rules around it.

"Being monetized is a blessing, it's not a guarantee," Blaque added.