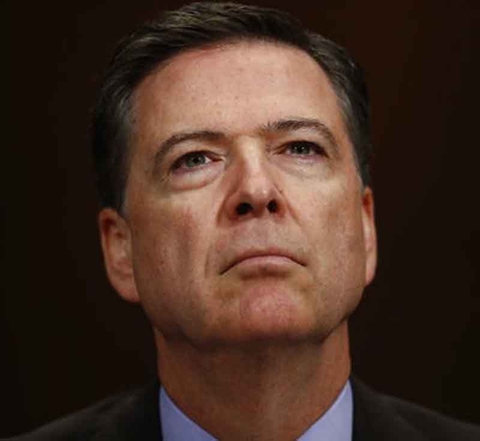 In a letter to Comey, Trump said the firing was necessary to restore "public trust and confidence" in the FBI. Comey has come under intense scrutiny in recent months for his role in an investigation into Democrat Hillary Clinton's email practices, including a pair of letters he sent to Congress on the matter in the closing days of last year's election.

Trump made no mention of Comey's role in the Clinton investigation. But the president did assert that Comey informed him "on three separate occasions that I am not under investigation."

The White House said the search for a new FBI director was beginning immediately.

Tuesday's stunning announcement came shortly after the FBI corrected a sentence in Comey's sworn testimony on Capitol Hill last week. Comey told lawmakers that Huma Abedin, a top aide to Hillary Clinton, had sent "hundreds and thousands" of emails to her husband's laptop, including some with classified information.

On Tuesday, the FBI said in a two-page letter to the Senate Judiciary Committee that only "a small number" of the thousands of emails found on the laptop had been forwarded there while most had simply been backed up from electronic devices. Most of the email chains on the laptop containing classified information were not the result of forwarding, the FBI said.

Comey, 56, was nominated by President Barack Obama for the FBI post in 2013 to a 10-year term. Praised for his independence and integrity, Comey has spent three decades in law enforcement and has been no stranger to controversy.

Before the past months' controversies, Comey was perhaps best known for a remarkable 2004 standoff with top officials in the George W. Bush administration over a federal domestic surveillance program.

As the deputy attorney general, Comey rushed to the hospital bed of Attorney General John Ashcroft to physically stop White House officials in their bid to get his ailing boss to reauthorize a secret no-warrant wiretapping program.

Comey described the incident in 2007 testimony to Congress, explaining that he believed the spy program put in place after the Sept. 11, 2001, terror attacks was legally questionable.

When he learned that Andrew Card, the president's chief of staff, and Alberto Gonzales, the White House counsel, were heading to Ashcroft's hospital room despite Ashcroft's wife's instructions that there be no visitors, Comey told Congress, Comey beat them there and watched as Ashcroft turned them away.

"That night was probably the most difficult night of my professional life," Comey said.