Trump hours away from briefing on classified Russia report 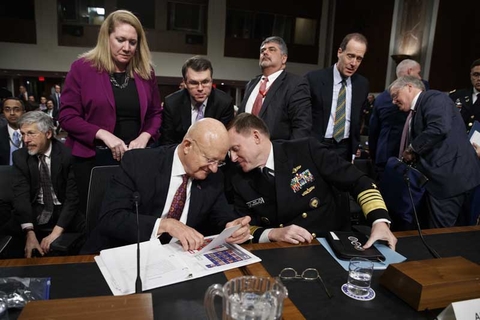 President-elect Donald Trump was hours away Friday from listening to the nation's top intelligence officials make their most detailed and persuasive case yet that Russia's government interfered in this year's U.S. presidential elections. AP photo by Evan Vucci.

WASHINGTON (AP) — President-elect Donald Trump was hours away Friday from listening to the nation's top intelligence officials make their most detailed and persuasive case yet that Russia's government interfered in this year's U.S. presidential elections.

The officials — Director of National Intelligence James Clapper, CIA Director John Brennan and FBI Director James Comey — are preparing to point to multiple motives for Moscow's alleged meddling as they brief Trump on their classified report Friday in New York. They briefed senior lawmakers Friday morning. President Barack Obama received a briefing on Thursday. A declassified version of the report is expected to be released at some point, likely next week.

The intelligence officials and lawmakers refused to comment when they left the briefing Friday in the U.S. Capitol. Asked how the briefing went, National Security Agency Director Adm. Mike Rogers responded, "Have a nice day."

House Minority Leader Nancy Pelosi, D-Calif., said the intelligence report was "quite a stunning disclosure" and said parts will be released today, though she didn't provide any specifics. She made the comments at her weekly Capitol Hill news conference.

Since winning the election, Trump has repeatedly questioned intelligence officials' assessments that Russia was behind the hacking of the Democratic National Committee and individual Democrats like Hillary Clinton campaign chairman John Podesta.

Trump remained dubious about the assertion even on the eve of his intelligence briefing, asking how officials could be "so sure" about the hacking if they had not examined DNC servers.

The Washington Post, citing anonymous U.S. officials, reported Thursday that intelligence agencies have identified parties who delivered stolen Democratic emails to WikiLeaks. The officials also said there were disparities between efforts to infiltrate Democratic and Republican networks, and said the U.S. intercepted communications in which Russian officials celebrated Trump's victory. It was not clear which of those details were included in the classified report.

Sean Spicer, whom Trump has chosen as White House communications director and press secretary, said the billionaire business will go into Friday's meeting "prepared to listen and understand how they got to the conclusions." Asked on ABC's "Good Morning America" if Trump would have an open mind, Spicer replied, "100 percent."

"The president-elect, I think, has a healthy skepticism on everything," the spokesman said, adding that "a rush to judgment is not in the country's best interest."

"I think the idea that he's approaching this in a very logical, very methodical way ... is the right way to go about it," Spicer added.

Ahead of the briefing, Trump moved to fill out his own intelligence leadership team, tapping former Indiana Sen. Dan Coats to lead the Office of the Director of National Intelligence, according to a person with knowledge of the decision.

Coats served as a member of the Senate Intelligence Committee before retiring from Congress last year. If confirmed by the Senate, he would oversee the umbrella office created after the 9/11 attacks to improve coordination of U.S. spy and law enforcement agencies. The person with knowledge of Trump's decision, as well as the others who spoke to The Associated Press about intelligence matters involving Trump, were not authorized to discuss the matters publicly and spoke on condition of anonymity.

Coats, a 73-year-old Capitol Hill veteran, served eight years in the House before moving to the Senate in 1989 to take Dan Quayle's place when he became vice president. He stayed in the Senate until 1998, then left to become a lobbyist. After a stint as ambassador to Germany under President George W. Bush, he returned to Indiana for a Senate comeback bid in 2010. He did not seek re-election last year.

Coats was a harsh critic of Russia and pushed the Obama administration to punish Moscow for its annexation of Crimea in 2014. When the White House levied sanctions, the Kremlin responded by banning several lawmakers, including Coats, from traveling to Russia.

Coat's nomination is likely to quell concerns that the president-elect is seeking a sweeping overhaul of intelligence agencies. Trump's transition team has also been considering ways to restructure agencies to streamline operations and improve efficiency. Transition officials have been looking at changes at both ODNI and the CIA, but those plans are said not to be aimed at gutting the intelligence agencies or hampering their capabilities.

The person with knowledge of the discussions said they reflected the views of intelligence officials who have told Trump's team that there is room for streamlining within the multi-agency intelligence community.

The Wall Street Journal first reported Wednesday night that Trump was considering changes at the intelligence agencies. Trump transition spokesman Sean Spicer disputed the report Thursday morning. "There is no truth to this idea of restructuring the intelligence community infrastructure. It is 100 percent false," Spicer said.

The scope of the changes discussed by some in Trump's transition team was unclear. But the prospect of a sweeping overhaul still created blowback, contributing to former CIA Director James Woolsey's decision to step aside as a senior adviser to the president-elect.

A person with direct knowledge of Woolsey's decision said the former CIA chief had not been significantly involved in the Trump team's discussions on intelligence matters and became uncomfortable being labeled as an adviser. In an interview on CNN, Woolsey said he did not want to "fly under false colors."