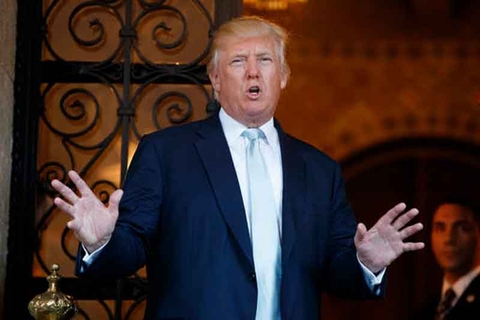 They could be the first of the 50,000 jobs tech billionaire Masayoshi Son promised to create after meeting with the president-elect earlier in December.

In the grand scheme of the economy, the jobs announcement is unlikely to have a major impact. Still, it's another example of how Trump is trying to stoke voters' belief that he is actively fighting for their well-being.

The announcement came during a whirlwind day in which Trump accused President Barack Obama of throwing up "inflammatory" roadblocks during the transition of power and said his administration was treating Israel with "total disdain."

Son is the founder and chief executive of SoftBank, one of Japan's largest technology outfits. He owns the U.S. mobile carrier Sprint, which Trump said Wednesday would be moving 5,000 jobs "back" to the United States. Son also controls OneWeb, which Trump said would hire 3,000 workers.

It was unclear whether the president-elect was referencing the Dec. 6 commitment by Son to invest $50 billion in the United States and create 50,000 jobs.

Trump said the addition of 8,000 jobs was "because of what's happening and the spirit and the hope."

Still, the U.S. job market has been robust for much of 2016. Employers have added more than 2.2 million jobs over the past 12 months — a sign of economic health that pre-dates Trump's presidential victory.

Sprint has struggled since its 2013 acquisition by SoftBank. The carrier shed roughly 9,000 workers between 2012 and 2016, reducing its staff to 30,000, according to annual reports.

Sprint's attempt to join with rival T-Mobile failed in 2014 after regulators objected to combining two of the four largest mobile telecom companies in the United States. Analysts say a Trump administration would be more likely to approve telecom mergers, including a deal between Sprint and T-Mobile.

Sprint Chief Executive Marcelo Claure said in a statement that the company is "excited" to work with Trump.

"We believe it is critical for business and government to partner together to create more job opportunities in the U.S. and ensure prosperity for all Americans," Claure said.

The Sprint jobs announcement came after tensions rose and fell Wednesday between Trump and Obama. Trump has made it clear that it didn't sit well with him when Obama recently boasted that he would have won the election if he'd been running.

"Doing my best to disregard the many inflammatory President O statements and roadblocks," Trump tweeted Wednesday morning. "Thought it was going to be a smooth transition — NOT!"

Later, however, journalists at Trump's Mar-a-Lago resort in Florida asked him about the tweet and how he thought the transition was going.

He said: "I think very, very smoothly. It's very good. You don't think so?"

Even later Wednesday, Trump told reporters he had spoken by phone with Obama and said the two "had a very nice conversation."

"We cannot continue to let Israel be treated with such total disdain and disrespect," he said in a two-part tweet. "They used to have a great friend in the U.S., but ... not anymore. The beginning of the end was the horrible Iran deal, and now this (U.N.)! Stay strong Israel, January 20th is fast approaching!"

The president-elect's complaints about the treatment of Israel came a few hours before John Kerry made his final speech about Mideast peace as secretary of state. Kerry criticized Israel for settlement-building and accused Prime Minister Benjamin Netanyahu of dragging Israel away from democracy.

Maldonado was chairman of the California Senate's agriculture committee; Cuban-born Murano was an agriculture undersecretary in George W. Bush's administration.

Trump also held meetings with a number of medical executives, likely for discussions about Obama's signature heath care plan, which Trump has called a "total disaster."