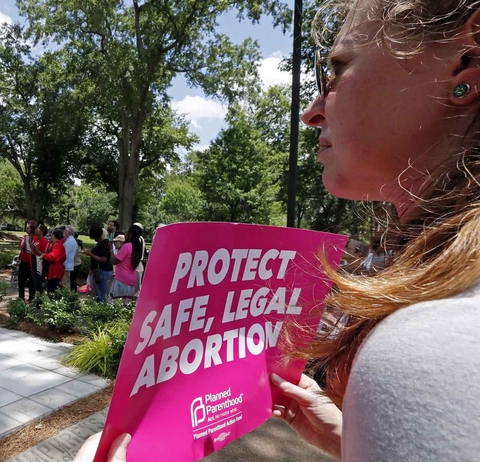 A group of reproductive rights and LGBTQ rights groups is asking a court to strike down a new rule issued by Trump administration that excuses religious and moral objectors from participating in or paying for services such as abortion, sterilization and assisted suicide.

In a complaint filed Tuesday, the groups argue that if the rule were to go into effect, it would "encourage health care workers to deny medical treatment to patients because of personal religious or moral beliefs."

"The rule is intentionally unworkable for health care facilities, including hospitals, and may result in these facilities doing away with reproductive and LGBTQ services altogether to avoid losing government funding," the plaintiffs said in a statement.

Richard B. Katskee, legal director for plaintiff Americans United for Separation of Church and State, said the rule was "unconstitutional in at least four ways" -- including violating the Equal Protection Clause by targeting marginalized communities.

Genevieve Scott, senior staff attorney at the Center for Reproductive Rights, said the rule is "intentionally confusing and unworkable."

"Even EMTs and administrative staff are encouraged to deny care," she said. "The rule is extremely broad and contains no limits on who is at risk of being denied treatment, even for those in need of emergency care."

Other plaintiffs in the lawsuit include the Center for Reproductive Rights, Lambda Legal, individual LGBT clinics and California's Santa Clara County.

When the final rule was issued earlier this month, the Department of Health and Human Services Office for Civil Rights said in a statement that it replaces one from 2011 that it deemed "inadequate."

The administration says the rule will protect individuals and health care entities from unwanted involvement with services such as abortion, sterilization or assisted suicide. The rule, according to the office, reestablishes existing protections created by Congress.

The final rule also notes that complaints submitted to the office about gender dysphoria-related surgeries will be considered on a case-by-case basis.

The final HHS rule drew immediate condemnation from several civil and reproductive rights groups when it was issued. They warned that those seeking reproductive care stand to lose, as do members of the LGBTQ community. They said the idea of religious liberty is being used to justify hurting communities and endangering lives and will harm women's health and that of transgender patients.