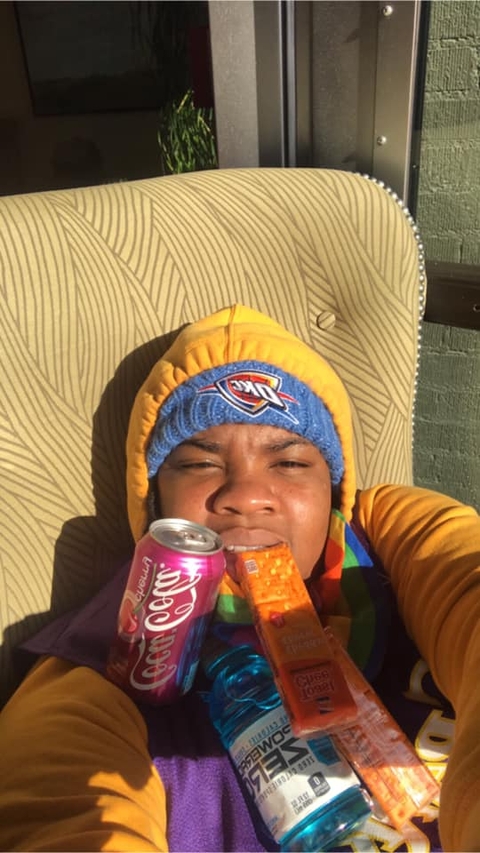 Shay White this morning protesting at Oklahomans for Equality in Tulsa. Facebook photo.

Early this morning, a disgruntled Tulsa resident began protesting at the Dennis R. Neill Equality Center to protest claims of racism by an Oklahomans for Equality (OkEq) board member.

Shay White posted comments and multiple live videos on her Facebook page calling out OkEq and board member, Sharon Bishop-Baldwin alleging racism by both. On a social media post, Bishop-Baldwin had referred to an employee of the Tulsa County Clerk’s office who has alleged ties to the Klu Klux Klan (KKK), but Bishop-Baldwin allegedly stated in this post that the woman's KKK involvement has nothing to do with the employee’s job performance.

White said on a Facebook video referring to Bishop-Baldwin, “In a very limpy post…” then White went on to talk about other people. As she returned to talking about Bishop-Baldwin, White said, “She said she don’t <sic> support that people should be calling for the woman to be fired because in [many states] she could be fired for being a lesbian and that’s the woman being part of the KKK has nothing to do with her job performance.”

That was White’s interpretation of the social media post. The original post has been removed from Bishop-Baldwin’s page.

Bishop-Baldwin declined to comment in a request by The Gayly.

In many of this morning’s live videos, White screamed multiple times “my black life matters” as well as making accusations of racism by OkEq employees and Bishop-Baldwin. She also stated that the center belonged to her now.

The live videos continued until about 11 a.m., including when Toby Jenkins, OkEq executive director, and Jose Vega, OkEq program coordinator arrived for work for the day.

According to the live videos, after White drove her car on the sidewalk in front of OkEq, she began throwing clothes, trash, and other items out of her car onto the sidewalk and into the building as well as using a chair to prop open the door while she went inside. As the videos continued, began throwing items on to the floor such as literature, paperwork from behind the desk and was smoking what looked like a small cigar in the Equality Center.

At one point, she began to tear art off the walls. At that point, Vega asked her not to destroy the artwork because it was the work of LGBTQ “community people.”

Up until then, both Jenkins and Vega had said very little to White, letting her speak out what she desired to say. Vega had asked her to stop blowing smoke in his face.

In a request by The Gayly, Vega declined to comment at this time. Jenkins did not respond to our requests for an interview as of the time of publishing this story.

Of note, White ran for State House District 77 in last year’s elections, being defeated in the primary election by Democrat John Waldron who went on to win the general election for Oklahoma House of Representatives of District 77. White is also a Licensed Social Worker.

In the final live video, Jenkins told White she had triggered the panic button, indicating the police would be on their way. At about 11 a.m., shortly after Jenkins told White about triggering the panic button, the live videos ceased, and White did not answer her phone for The Gayly requesting a comment about these events. A message was left for White to return the call.

5:00 p.m. Jenkins did not respond to our request for an interview. However, we received this e-blast from OkEq at approximately 4:30 this afternoon:

"Regarding the Incident at the Equality Center

We regret that the incidents of today were deemed newsworthy. What occurred today was a private matter that, in part, resulted from a disagreement between individuals on social media. One of our constituents arrived at the center as a result of the disagreement, and unfortunately, a conversation regarding the initial social media post was unable to occur.

We know this has left our constituents concerned and confused. Oklahomans For Equality is committed to an internal and organization-wide examination of leadership and programs to address any bias.

This incident highlights an intersection of social justice issues that are faced by the multitude of our diverse constituents. We are committed to having a productive dialogue going forward as to what we can do, proactively, to address and confront the systemic injustices that exist in our communities. We are a group that seeks to lift one another up. Today’s unfortunate situation does not reflect the care and support that we seek and see in our community every day.

We appreciate the concern of our community and thank you for your continued support and understanding. We know that for many of you this is a safe place in which you have invested many precious hours and generous donations.

If you have been impacted emotionally by this event, please feel free to reach out to OkEq to access our mental health resources.

The center is open to the community and facilities have been restored. Programs will meet as regularly scheduled. No charges were filed."