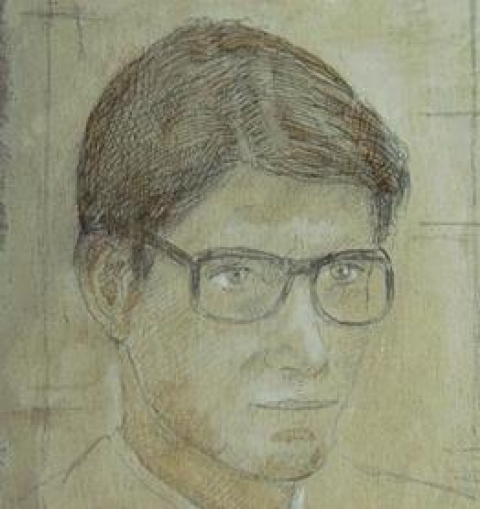 A drawing of Yves Saint Laurent in 1976, by Reginald Gray. Photo / public domain.

But on Saturday, the controversial, no-holds-barred story of one of the 20th-century's greatest fashion designers, Yves Saint Laurent, who died in 2008, screened in competition at Cannes.

Director Bertrand Bonello's "Saint Laurent" is a dark and sexually explicit movie, featuring Gaspard Ulliel, who lost weight and bared all to play the title role, and Louis Garrel in the role of Jacques.

It's the second feature film on the legendary designer with the dark rimmed spectacles in less than six months. Unlike the first authorized film by Jalil Lespert, the Bonello project was publicly opposed Saint Laurent's surviving life and business partner, Berge.

Scenes of full nudity, graphic homosexual kissing, drug taking and references to hard gay sexual practices litter the film, spliced with contrasting scenes of the precision of the fashion atelier.

The producer says the film was made not to attack Berge but to represent the truth behind the softly-spoken creator of the "Le Smoking," who remains one of fashion world's most enigmatic figures.

"This film was never intended to be against him (Berge)," said the film producer Eric Altmayer. "Our ambition since the beginning was to make a film simply on Saint Laurent. The fact there was this second film liberated us from the constraints of a traditional biopic, to go deeper into the truth."

Almost peripheral in the movie are references to Saint Laurent's artistic impact as one of the most mold-breaking designers of the 20th century, a man who irreversibly liberated women's fashion during the 1960s sexual revolution.

Instead the designer is seen near death, frail, undignified and ravaged by pill abuse.

In one of the strongest scenes, his beloved French Bulldog, Moujik, dies after munching though the myriad pills that have been scattered on the designer's floor as he passes out.

The director was refused rights to use YSL clothing in the filming. But during the press conference, the producer said being shunned by the establishment can spur creativity.

"We had access to nothing, nothing at all not even a shirt, so everything you see in the film was recreated," said Altmayer. "Fantastic work was done."