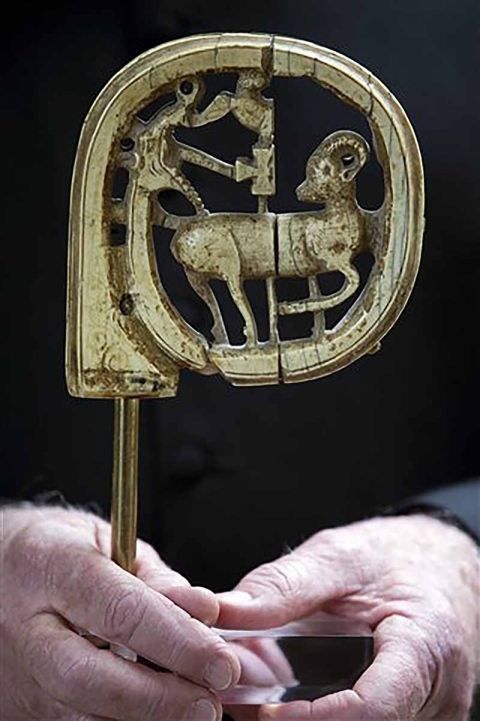 The ivory top of the pastoral staff of St. Gregory the Great, the 6th-century pope who dispatched missionaries to England to spread Christianity, is seen at the San Gregorio al Celio church in Rome, Thursday, Jan. 7, 2016. (AP Photo/Andrew Medichini)

VATICAN CITY (AP) — The Vatican is loaning a deeply symbolic religious relic to a meeting in Britain discussing the future of the 80 million-strong Anglican Communion that has been badly divided over issues of female bishops and same-sex marriage.

The ivory top of the pastoral staff of St. Gregory the Great — the 6th-century pope who dispatched missionaries to England to spread Christianity — will be displayed in England's Canterbury Cathedral before and after the Jan. 11-16 meeting of Anglican primates.

The Archbishop of Canterbury, Justin Welby, has summoned the 37 primates to discuss how the Communion can keep working together after it has been splintering for years over issues such as the ordination of female and gay bishops and the blessings of same-sex marriage.

The Vatican has watched from afar but nevertheless with alarm as the rift has widened, fearing that schism within the Anglican Communion will only complicate its own efforts at promoting Christian unity.

Cardinal Gianfranco Ravasi, the Vatican's culture minister, authorized the loan of Gregory's pastoral staff last month, according to a letter obtained by The Associated Press. He wrote that it was a "highly symbolic" relic and a "mark of the bond that spiritually unites the Catholic and the Anglican churches."

Gregory, who was pope from 540-604, sent a mission to England in 597 to bring Christianity to the region. The mission leader, Augustine, became the first archbishop of Canterbury, and both Augustine and Gregory remain important figures to the Anglican Church.

The dean of Canterbury Cathedral, the Very Rev. Robert Willis, said the loan of Gregory's crozier was a sign of "ecumenical encouragement" during the primates' meeting, as well as a link to Gregory.

The Catholic and Anglican churches split in 1534 after English King Henry VIII was refused a marriage annulment. A half-millennium later, the two churches remain divided on a host of issues, including the same ones that are dividing the Communion itself: female bishops and gays.

The idea to send the relic came from the Rev. Robert McCulloch, the Australian procurator general of the St. Columban Catholic missionary order. McCulloch — who has been active in interfaith and ecumenical relations, most recently the round of cricket matches between the Vatican's cricket club and the Church of England's team — will personally take the relic to Britain on Friday.

In an interview, McCulloch said it was remarkable how quickly the loan was approved by the Vatican and the Italian governments, with support from the British.

"It's a gesture of support, of unity and harmony from the Catholic Church for the Anglican Church," he said.

The crozier is usually kept at the San Gregorio al Celio church in Rome. The church has long played a role in Anglican-Catholic affairs. Pope Benedict XVI and Archbishop of Canterbury Rowan Williams celebrated a vespers service at San Gregorio in 2012, and their predecessors, John Paul II and George Carey, celebrated vespers together there in 1996.

By Nicole Winfield. Copyright 2016 The Associated Press. All rights reserved. This material may not be published, broadcast, rewritten or redistributed.​