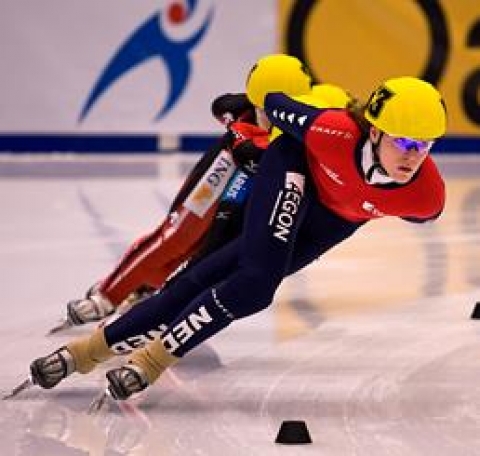 Sochi, Russia (AP) — The Dutch are just racing themselves at the Olympic speed skating oval.

Jorien ter Mors led another Netherlands sweep at Adler Arena, beating favorite Ireen Wust in the women's 1,500 meters Sunday and setting up a shot at becoming the first skater to win medals in both long and short track.

Competing in an early pairing, Ter Mors turned in a stunning time of 1 minute, 53.51 seconds, an Olympic record and the second-fastest ever at sea level. The only skater to go quicker was Wust at the Dutch Olympic trials in December.

If a fourth medal had been available, the Dutch would've snatched it, too.

Marrit Leenstra finished fourth, knocked off the podium by Van Beek in the final pairing.

Ter Mors is doing double-duty in Sochi. She just missed a short track medal Saturday, finishing fourth in the 1,500 at the Iceberg Skating Palace next door. She has another chance in the 1,000, which begins Tuesday.

"It is bizarre that I can do this," said Ter Mors, who had to wait nearly an hour to know the gold was assured after skating in the ninth of 18 pairings.

What the Dutch are doing is beyond belief.

They have now won 16 speedskating medals at Adler Arena, breaking the previous record haul of 13 set by East Germany at the 1988 Calgary Olympics. And with favorites in three of the last four events, they figure to push the mark to heights that may never be seen again.

All by themselves, the Dutch skaters put their country atop the medal table in Sochi. Counting a bronze won in short track, the tiny country has 17 medals overall — one more than the United States and Russia had by Sunday night.

It was the fifth win in eight events and the third sweep of the medal podium for the Dutch speedskaters, who have captured at least one medal in every race.

Wust was a heavy favorite to repeat as 1,500 champion based on her December time (1:53.31) and a gold medal in the 3,000 to start the Sochi Games. She settled for her sixth career medal, equaling Rintje Ritsma for the most ever by a Dutch Winter Olympian.

"I admit I'm a bit ticked," Wust said. "I had (a gold medal) in me. Maybe I was too keen, too concerned about lap times. You have got to be loose out there on the ice, and then the lap times will come. But I don't begrudge Jorien the gold."

At the other end of the scale are the Americans, who had another dismal day at the big oval. Heather Richardson of High Point, N.C., finished seventh, Brittany Bowe of Ocala, Fla., struggled to a 14th-place finish, and Jilleanne Rookard of Woodhaven, Mich., was 18th.

Despite switching suits in a desperate bid to change their fortunes, the Americans are facing the very real possibility of their first medal shutout in speedskating since the 1984 Sarajevo Olympics.

"Today was actually pretty good," said Richardson, calling it her second-fastest time at sea level. "I just wanted to go out and have fun. I was so much more relaxed than I've been at any point during this competition."

Richardson and Bowe both arrived in Sochi expecting to contend for multiple medals after impressive results on the World Cup circuit. But those dreams were ruined by a debacle with the team's new high-tech suits, which were touted as the fastest in the world but wound up being dumped midway through the Olympics, as well as questions about the way the Americans trained leading up the games.

"As of now, results don't matter," Bowe said. "It's just the fact that I go out there and skate my hardest. I can chalk it up as a win in my book."

Ter Mors is switching back and forth between two sports, intent on winning medals in both.

While each is considered a speedskating discipline, they are contested with strikingly different equipment and tactics. Long track is held on a 400-meter oval, with skaters racing against the clock wearing clapskates. Short track is held on the much-tighter confines of a hockey-sized rink, with daring, pack-style racing that has been compared to roller derby.

"She rather would have had bronze than gold here," Otter said. "This is a pastime for her."

Not a bad one at that.

Ter Mors has also dealt with personal trauma. Her father Henk, who introduced her to skating when she was 11, died last May.

"I'm just speechless," Ter Mors said. "To become Olympic champion here, after everything I went through in the past year, this is absolutely fantastic."

Leenstra was denied a spot on the podium by her orange-clad teammates.

"Unfortunately, there are only three spots on the podium," she said. "But still I would rather have Dutch girls in front of me than others."