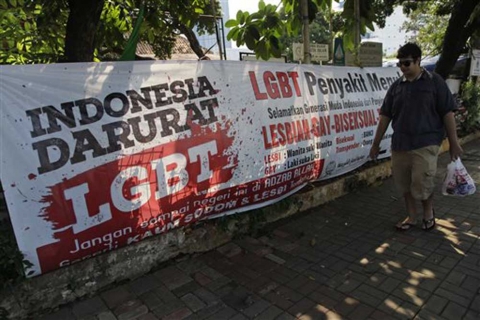 Gays are a contagion, declares the banner hanging in the Indonesian capital. Photo by Tatan Syuflana, AP.

JAKARTA, Indonesia (AP) — Gays are a contagion, declares the banner in bold red and black lettering that hangs on the sidewalk of a bustling neighborhood in the Indonesian capital close to embassies, luxury hotels and the homes of some of the country's leaders.

Erected by an ultra-conservative Islamic group, it's the latest manifestation of a virulent campaign of denigration against gays, lesbians and other sexual minorities that has entered the mainstream and is testing Indonesia's image for moderation.

Echoing venomous headlines in conservative newspapers, government officials and leaders in areas from psychiatry to religion also have heaped condemnation on homosexuality. The defense minister even said gays and lesbians were a more serious threat to national security than nuclear war.

The fevered atmosphere began emerging in late 2015 when top academics attacked gay support groups at universities. By February it had become an onslaught. Pressure from Islamic hardliners forced the closure of an Islamic boarding school for transgender students in Yogyakarta last month.

"Everyone in society is reading the propaganda of hate," said Augustine, a veteran lesbian activist who goes by one name. "They forget LGBT are human."

She said that for several weeks, she has received phone calls late at night or before dawn from men who threaten to kill her if she does not close the advocacy organization she works for.

Augustine said she has not felt so abused over her sexual orientation since she fled her own father's anti-gay violence in the late 1990s.

Indonesia's human rights commission has deplored the outpouring of hatred, but President Joko "Jokowi" Widodo has been silent. He was elected on a platform that included human rights and respect for diversity as a top priority.

Kyle Knight, a researcher for New York-based Human Rights Watch, said it feels like the cause of equality has been set back by a generation. Bigoted officials "actually do ruin people's lives," he said.

Among the startling announcements from officials, the minister for technology, research and higher education said LGBT people should not be welcome on university campuses. Harking back to medical theories discredited decades ago, the head of the psychiatry association called homosexuality a mental condition that could be treated, earning a rebuke from professional associations abroad.

Smartphone messaging app Line pulled stickers showing same-sex couples from its Indonesian emoji store in a response to a quixotic order from officials to stop the spread of gay and transgender imagery.

Homosexuality is not illegal in Indonesia, which is the world's most populous Muslim nation and embraces both democracy and moderate Islam. Some of the archipelago's ethnic groups have centuries-old traditions of same-sex love. Transgender women, known as waria, are familiar to many people and extended tolerance by the majority. Some of the stickers abruptly censored by Line were created with the help of waria, whose slang has been widely adopted in popular culture.

But daily life is lived under an uneasy status quo that tolerates LGBT people as long as they are not too visible. Activism has largely focused on areas such as preventing the spread of HIV and reducing social isolation rather than pushing for specific rights such as anti-discrimination measures. Violence has forced some gay people to flee Aceh, a Sumatran province that practices a form of Shariah law and canes people for behavior such as adultery, gambling and drinking alcohol.

Many activists believe conservatives in Indonesia's ruling circles are unnerved by incremental liberalization in neighboring Southeast Asian countries and the advance of gay rights in Western nations, including the U.S. Supreme Court's ruling last year in favor of same-sex marriage.

Some misunderstand homosexuality as being a disease or cultural trend and fear the idea of an Indonesian gay movement, said Dede Oetomo, who founded Indonesia's first gay-rights groups in the early 1980s.

A U.N. report in 2014 on the status of gay rights in Asia that estimated Indonesia has more than 100 LGBT groups was probably also unsettling to some a country where ignorance about sexuality is widespread, he said.

"They are afraid LGBT will recruit their children," said Oetomo.

Some government ministers have grudgingly spoken out against the anti-gay onslaught, saying LBGT Indonesians have the same rights as anyone else.

"We have to treat them as citizens of Indonesia," said Luhut Pandjaitan, coordinating minister of legal, political and security affairs. "This is something naturally happening. I don't think we can stop this one. But to contain, we can do it to some extent."

He said he prays daily that none of his grandchildren are gay because "nobody wants to be like that."

Groups that represent foreign businesses in Indonesia hope the current controversy will blow over, like previous episodes of social panic about alcohol and prostitution.

Despite being one of biggest economies in the developing world, Indonesia lags behind neighbors such as Singapore and Thailand in attracting foreign investment. If the anti-gay hysteria mounts or produces legal measures at the national level, it could add to perceptions of the country as unpredictable and deter some foreign executives from working in the country.

Oetomo said there are signs the level of hysteria is abating. Republika, a hardline newspaper, has toned down its attacks after activists met with its editors.

Though activists say the onslaught was frightening and wiped away years of progress, in the longer run it may galvanize more activism and be a catalyst for overcoming social isolation.

"LGBT has become a household word," Oetomo said. "It's going to be long haul, but in an ironic way, we could thank the bigots."